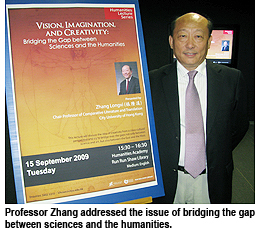 Professor Zhang Longxi, Chair Professor of Comparative Literature and Translation at City University of Hong Kong (CityU), addressed the contentious and captivating issue of the perceived gap between science and the humanities and the East and the West during the first lecture of the Humanities Lecture Series on 15 September.

Speaking in the new Humanities Academy of the Run Run Shaw Library, Professor Zhang delivered a lecture entitled “Vision, Imagination and Creativity: Bridging the Gap Between Sciences and the Humanities”.

Following an introduction from Dr Irene Hsiao, Assistant Librarian, and a souvenir presentation from Professor Steve Ching Hsianghoo, University Librarian, Professor Zhang opened his lecture by stressing that imagination plays an important role in all creative activities, no less so in science and technology than in art and literature. He also highlighted comments made by one of the great scientific minds, Albert Einstein who said, “Imagination is more important than knowledge.”

"Coming from a great scientist, these words are remarkable, even astonishing, because most people would think of science as providing us with hard facts and true knowledg 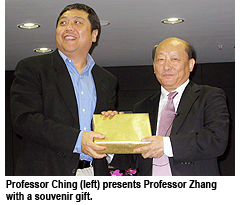 e, while they typically relate imagination to art,” said Professor Zhang. “Nevertheless, as the American physicist David Bohm argues, science, art and religion were not separated from one another in the early days of human history, but in modern times their functions have become so fragmented and confused that science has lost its original connection with the artistic and spiritual side of human life, and has 'parted almost completely from its role of aiding man to assimilate the universe psychologically, so that he could feel at home in a world that he understands.’”

Professor Zhang argues that an understanding of the nature of scientific work would allow for the reconciliation between knowledge and imagination, science and art or the humanities in general, and bridge their presumed gaps. “We may try to explore questions about imagination and creativity and see how they help both the scientist and the artist reach their goals,” he said.

In concluding his lecture, Professor Zhang addressed the issue of bridging the gap between the East and the West. He pointed out that neither Greek nor Chinese thought should be seen as the major source of scientific ideas. 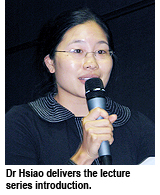 "Fortunately in the pursuit of knowledge and beauty, we do not have to make such a choice,” he said. “The appropriate way of doing things is to be inclusive, assimilating all that is available and useful for our understanding, and trying to go further by boldly imagining what might lie beyond what is known and available.”

"To rediscover the intellectual and spiritual resources in our cultural traditions on which we can draw for future development, to combine the best of the East and the West, art and science, imagination and knowledge, beauty and truth, is perhaps what may constitute the next big step in the advancement of our knowledge and our life in the 21st century.”

The Humanities Lecture Series will continue with poet Bei Dao giving a reading of his work on 13 October. Professor Cheng Pei-kai, Director of the Chinese Civilisation Centre, will deliver the third and final talk of the semester on 24 November.