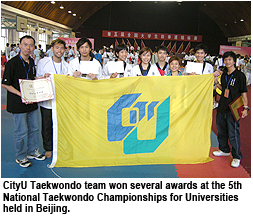 Taking part in their first National Taekwondo Championship for Universities in Beijing in July, the Taekwondo team from City University of Hong Kong (CityU) collected an impressive nine titles.

The men’s team took home first prize in the general university team event and placed second and third in the individual events. The women’s team finished in third place in the team event and attained second and fifth positions in the individual events. In addition, CityU provided the winner of the outstanding athlete award and received certificates for outstanding coaching and team displaying the most athletic spirit. 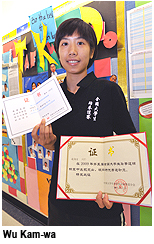 Wu Kam-wa, Year 3 student from the Department of Applied Social Studies, was runner-up and won the outstanding athlete certificate in the 63kg category in the women’s event. Practicing Taekwondo since Form 1, she has been crowned champion in the All Hong Kong Ladies’ Taekwondo Competition for four consecutive years. She attributed the success to team morale, sufficient training and preparation and good coaching.

"It is especially important to retain your strength, apply appropriate strategies, analyse the opponent and make accurate and fast judgments during a short six-minute contest," she said. As a representative of the Hong Kong team, she will take part in the East Asian Games to be held in Hong Kong in December. 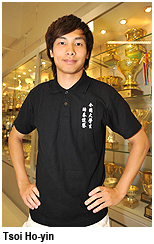 Runner-up in the 72kg category in the men’s event, Tsoi Ho-yin also started his Taekwondo in Form 1 and is a Year 1 student studying in the same department as Wu Kam-wa. As a representative of Hong Kong Youth Training Team, he said every competition provided valuable experience. He performed creditably, achieving his best scores against an opponent who had a distinct height advantage. He is now training hard with the Youth Training Team to prepare for the 11th National Sports Games in Shandong in September.

In line with CityU’s advocacy of whole-person development, Taekwondo is a sport that fosters perseverance and mental strength that help students develop confidence and calmness confronted by unexpected situations. It has been 20 years since the inception of CityU’s Taekwondo Club, which provides its best athletes to form the University team. Wong Yu-wing, captain and coach of the CityU Taekwondo team and the Club, said there is a cohesive bond among all members of the University team.

"Most of the coaches and captains of CityU’s sports teams are alumni of the University. Some are former representatives of the Hong Kong sports team and others are Taekwondo association coaches. As both comrades and friends for so many years, we are all glad to help the alma mater to train our young students and share our experience with them," said Wong. 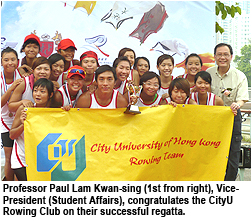 In addition to the Taekwondo success, CityU’s Rowing Club also performed well in the Jackie Chan Challenge Cups Hong Kong University Rowing Championships 2009 held on 1 and 2 August. The men’s team claimed one gold, two silver and one bronze medals, while the women collected one gold and one bronze and an overall third place for the team.