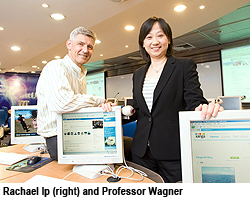 The award-winning paper Weblogging: a study of social computing and its impact on organisations was co-authored by Rachael and her supervisor Professor Christian Wagner, both from CityU’s Department of Information Systems (IS).

“I was beyond my expectations to earn such a high accolade from so many articles published in top international journals. As a teacher, I need to look for new information technologies and social software for my class. Interacting with CityU students has inspired me to study the effects of web blogging. The paper benefited from my teaching experience and research studies,” Rachael said.

Rachael, who joined CityU as an instructor since 2001, has completed her Bachelor of Arts with Honours (IS) and Master of Philosophy at CityU and holds a Master of Education .

“Special thanks must be given to Chair Professor Wei kwok-kee, Dean of the College of Business, and Professor Wagner, as they encouraged me to participate in international conferences where I gained valuable experience and feedback,” she added.

Professor Wagner said researchers at CityU were ahead of the industry trends. “Researchers study the phenomenon of new information technologies before they become popular. Like surfing, websurfers must be early enough to catch the waves. Rachael is a good surfer and this award recognises her foresight,” said Professor Wagner.

The paper included 33 Hong Kong university student interviews and examined their blogging behaviour. They were categorised into four types of bloggers based on their usage intensity rated from heavy to low (namely, habitual, active, personal and blogging lurkers).

“Habitual users are addicted to blogs and seemingly unable to live without them. At the other extreme, blogging lurkers keep blogs but never update but are eager to learn about their friends and maintain a blog so they can subscribe to friends’ web blogs,” Rachel explained.

“Bloggers keep posting, commenting or reading blogs to satisfy their individual and social needs. The major social need of the bloggers is to create their own social circles, to be socially accepted and to maintain social exchange with peers,” she said.

Though social computing software such as MSN and Facebook are not usually formal communication tools within organisations, Rachael’s paper suggested organisations take advantage of using them. “Organisations that allow employees to use software they are familiar with, instead of other communications software, can save training costs and avoid resistance. Such organisations will be regarded as ‘open-minded’ by students too,” she said.

Where organisations are using email as a medium to attract customer attention, Rachael suggested marketing departments should adopt social software to interact with customers. “Bloggers ignore advertising emails. They are interested in a more personal and ‘natural’ communication style in web blogs. Organisations that reach customers in this way should be able to reap extraordinary benefits,” she said.