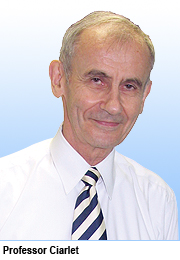 The respected and well-known Society for Industrial and Applied Mathematics (SIAM) has bestowed a special honour upon a City University of Hong Kong (CityU) mathematics professor.

Chair Professor Philippe Ciarlet from the Department of Mathematics was recently named a SIAM Fellow for his contribution to mathematics. Specifically, the society said he was recognised for his “contributions to numerical analysis and computational mechanics, particularly to the development of the mathematical theory of finite element methods and the modelling of elastic structures.” The fellowship took on extra significance, given the fact very few recipients were outside the US.

“The prestige of SIAM in the world of applied mathematics will unquestionably mean this fellowship reflects well on CityU’s international standing,” said Professor Ciarlet.

Professor Douglas Arnold, President of SIAM, said the programme created last year would continue to grow in stature. “I believe the SIAM Fellowship will eventually come to be regarded as similar in stature to the IEEE Fellowship.” The highly regarded IEEE Fellowship is awarded for outstanding achievements in engineering and technology.

SIAM fosters the development of applied mathematical and computational methodologies needed in these various application areas. Through publications and research, SIAM promotes cooperation between mathematics and the worlds of science and technology.