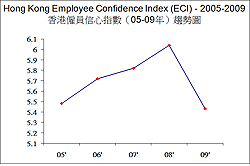 After three consecutive annual rises, workplace confidence in Hong Kong has fallen below 2005 levels according to a survey conducted by the Department of Management at City University of Hong Kong (CityU).

The Employee Confidence, Industrial Relations and Employee Commitment Survey 2009 was conducted in March, with 810 Hong Kong citizens in full-time employment (aged 18 or above) interviewed by telephone. They were asked to express their views on employment confidence, industrial relations and work commitment. The annual survey is part of the CityIndex to be launched by CityU to reflect the overall social and economic situation in Hong Kong, and offers detailed insight into how Hong Kong employees view their jobs. The findings can help employers devise corresponding human resources policies.

The Employees Confidence Index (ECI) is measured on a scale of 0 to 10, representing ascending levels of confidence in terms of “Well-Being”, “Job Security”, “Job Prospects” and overall perceptions of the job market. Compared with last year, employee confidence declined markedly. The ECI mean fell by 0.61 points to a rating of 5.43, its lowest level since the survey began in 2005, suggesting Hong Kong workers were less confident about their prospects of finding a better job. (Previous ECI ratings from 2005, 2006, 2007 and 2008 were 5.48, 5.72, 5.82 and 6.04 respectively.) Employees in the Transport, Storage & Communication (5.07) sector reported the lowest confidence level, while those in Wholesale & Retail (5.59) reported the highest. 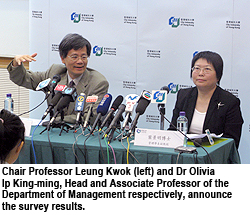 Compared with last year, there were no significant changes to “Well-Being”. Respondents remained largely satisfied with their relationships with colleagues (7.58) and were positive in regard to their job performance (7.16). However, they were less buoyant about “Job Security”, with confidence levels falling from 7.06 to 6.64. Confidence about internal career prospects also decreased sharply, from 4.59 to 3.25. There was a widespread lack of confidence in the possibility of securing a promotion, with this category scoring the lowest at just 2.74.

Chair Professor Leung Kwok, Head of the Department of Management and principal investigator of the survey, said employee confidence correlated closely with the overall economic climate. The adverse effects of the recent financial tsunami on employment were fully reflected in this year’s survey results, he said.

“Hong Kong people have enjoyed steady economic growth over the past four years and were positive about both the economic climate and employment,” said Professor Leung. “Their confidence in the economy, employment and job prospects only slumped at the onset of the global financial tsunami.”

The Industrial Relations Index (IRI) is measured on a scale of 1 to 5. A higher score represents more positive relations between employers and employees. The latest survey shows that industrial relations in Hong Kong have been stable during the past three years. The IRI score this year was 3.45, suggesting moderate employer-employee relations. The IRI for employees in Import & Export Trades (3.53) was the highest, whereas the lowest level was registered by employees in Wholesale & Retail (3.38).