A team of three Year 2 students from the College of Science and Engineering, City University of Hong Kong (CityU), clutched an honour as one of the Meritorious Winners among 1,675 teams representing institutions from 12 countries in the international 2009 Mathematical Contest in Modelling.

The team comprising Gao Siya, Ronald Liu Hao and Andy Wang Xian showcased their skills in mathematical modelling and interdisciplinary problem-solving in the design of a traffic circle to win the award. 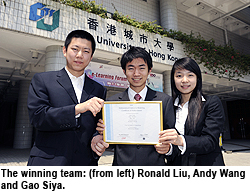 The competition was by far the most prominent in mathematical modelling and attracted entrants from many of the world’s top universities including Cornell, Harvard, Massachusetts Institute of Technology, Princeton and Tsinghua.

Over four days, the team researched, modelled and submitted their solution to the modelling problem “Designing a Traffic Circle”. Many cities and communities have traffic circles, from those with many lanes, such as at the Arc de Triomphe in Paris and Victory Monument in Bangkok, to single-lane local intersections. Contestants had to use a model to determine how best to control traffic flow entering, within and exiting the circle.

According to Gao Siya, Ronald Liu and Andy Wang, students from the Department of Mathematics, Department of Physics and Materials Science and Department of Electronic Engineering respectively, building a functional traffic circle required a sound understanding of fluid-dynamics. The team devised a model that was relatively simple to construct for engineers who did not themselves have a strong background in fluid dynamics or traffic flow. Variables such as driver behaviour, multiple lanes, peak hour congestion, and traffic lights had to be considered. 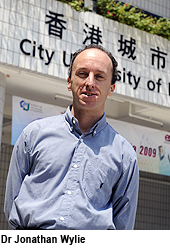 “Comprehensive training at CityU prepared us well to meet the challenges of this competition, ensuring we had the necessary creativity, teamwork and data mining, analytical and reporting skills,” Andy Wang said. “Special thanks must be given to Dr Jonathan Wylie, Associate Professor of the Department of Mathematics, who provided his full assistance with modelling techniques.”

“The performance of the students can only be described as outstanding. While the competition is designed for final year students, the team was still able to obtain an excellent ranking despite it being only their second year,” said Dr Wylie. “This result clearly shows that CityU students are capable of achieving world-class results in a highly competitive environment.”

Meritorious Winner honours were bestowed upon teams who finished among the top 19% of competitors.

The Mathematical Contest in Modelling is administered by The Consortium for Mathematics and its Applications, and funded by the US National Security Agency. The 2009 event was primarily an online contest. It attracted 350 US teams and 1,325 international teams from Australia, Canada, mainland China, Finland, Germany, Hong Kong and more.