City University of Hong Kong's (CityU) School of Law held its inauguration ceremony for the Advanced Programme for Chinese Senior Judges on 25 May. The second cooperative venture between CityU and the National Judges College of the Supreme People’s Court of the People’s Republic of China, the programme provides a systematic, bespoke legal programme for Chinese senior judges. 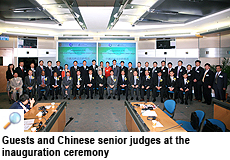 Building on the success of the LLM programme for Chinese judges conducted earlier this year, the Advanced Programme for Chinese Senior Judges focused on enhancing the judges’ knowledge of the common law system and important international legal concepts. The programme had the generous support of donor JSM.

The 25 judges taking part are from various parts of China, including Beijing, Guangdong, Nanjing, Xinjiang and Qinghai. Most are senior judges from Higher People’s Courts and Intermediate People’s Courts. 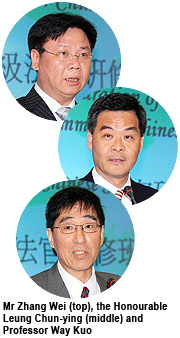 Mr Leung Chun-ying said the programme was important given China’s rapid development. “As the country plays an increasingly important role on the world stage, it is vital that Chinese senior judges enhance their understanding of the common law system and key international legal topics. As always, CityU has made a meaningful contribution.”

“The programme marks a milestone in local legal education and the continued collaboration between the National Judges College of the Supreme People’s Court of China and the School of Law,” said Professor Way Kuo. “They (the Chinese senior judges) will return to mainland China with a better understanding of common law, an international perspective on legal issues and be positioned to play a pivotal role in improving the Chinese legal system.”

The programme will run twice a year as a four-week course, offering the senior judges a good grounding in common law system and important international legal concepts, in particular the function and operation of case law. It covers legal topics ranging from the rule of law in common law jurisdictions, basic law, finance, commerce and intellectual property rights. The judges attend lessons at CityU, visit law enforcement organisations and the Legislative Council and take part in interactive video-link lessons conducted by law scholars from the School of Law of Columbia University. 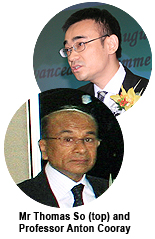 “We applaud CityU for its initiative in tailoring a programme for Chinese senior judges, introducing a new era in legal education under the ‘one country, two systems’ concept,” said Mr Thomas So. “We firmly believe this programme will provide the judges with a good understanding of the common law system, as well as the insight into the ideologies of the different legal systems. With these tools, we believe the judges will be in a position to help lead the motherland in meeting the challenges presented by a globalised world.”

“With generous sponsorship, our collaboration with the Supreme People’s Court of China will thrive in the years to come,” said Professor Anton Cooray. “We hope to offer even more courses in the future to cater for the requirements of Chinese judicial personnel as China’s legal system evolves alongside its international status.”