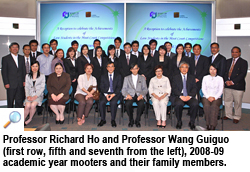 Twenty-one Juris Doctor (JD) and Bachelor of Laws with Honours (LLB) students led by the School of Law (SLW) of City University of Hong Kong (CityU) participated in six international / regional mooting competitions during the 2008-09 academic year. To recognise the academic advancement and self-development of these students, SLW held a reception on 28 April.

“The members of the University community who won at international competitions demonstrate the success of the University in nurturing and developing the internationally recognised talent of students. Participation in the mooting competition fosters cross-cultural exchange of ideas and cements relationships throughout the worldwide university community,” said Mr Leung Chun-ying, Council Chairman of CityU.

“I hope these students will help train their fellow students, so the whole school will benefit,” said Professor Richard Ho Yan-ki, Provost of CityU. 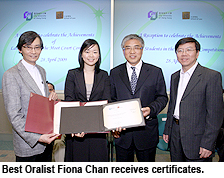 Professor Wang Guiguo, Dean of SLW, said, “Since the academic year 2008-09, the School has placed more emphasis on mooting, as it is an essential skill for the students to master. We believe this enhances students’ research capabilities and advocacy and critical thinking skills. Our students’ success demonstrates that CityU Law School has attained the international benchmark of world-class law schools and that our students are able to compete globally.”

In moot court competitions, students are required to research a complex hypothetical scenario, prepare written papers and participate in courtroom hearings. Moot competition is an effective means to prepare for legal practice and hone advocacy skills. 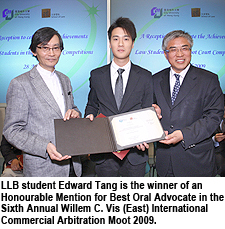 Fiona Chan’s Best Oralist title came in her first mooting competition. She said she refined the art of advocacy during the competition. Her teammate Ryan Law was also participating in his first competition. “Our team did not have any case references or experience in the use of anti-satellite and integrated space based defence systems in Hong Kong. We needed to put in extra time and effort over a fortnight to study international law and current affairs regarding the national defence in foreign countries.”

The winning team was coached by Dr Vernon Nase, Visiting Fellow of SLW. “Where Australian students have approximately three months of free time over their summer break, Hong Kong students have only a couple of weeks of spare research time around Christmas,” said Dr Nase, who has extensive moot training experience at foreign universities. “Our three students were dedicated, hard-working and extremely professional in their preparation for the moot. It has been a great privilege to work with them and to know that they achieved international excellence.”