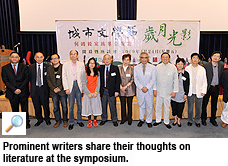 The Fourth City Literary Festival organised by City University of Hong Kong (CityU) was held from 24 to 27 April in Hong Kong and Macau. Under the theme “Rhapsodies of Time”, this year’s Literary Festival invited many renowned guests to seminars and workshops to share their experience and insights into literary writing. Many young people have also taken part in different festival events to expand their creativity. 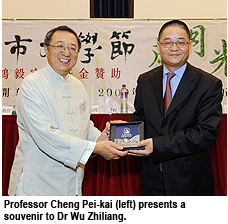 Professor Cheng Pei-kai indicated that this year’s additional category, Art and Cultural Criticism, carried significant meaning. “There has long been a lack of objective and unbiased artistic and cultural critique in Hong Kong. I hope this event can encourage more young people to pursue writing in this area to forge its local development,” said Professor Cheng.

Dr Wu said the Literary Festival bolstered the literary writing and cultural development within both cities. During the seminar, well-known guests shared their writing experience and expressed their writing expectations of young people in Hong Kong and Macau.

Mr Lam pointed out that cultural critique is still only in its nascent stages locally. He suggested young people start with writing film critiques, as film was an art form reflecting contemporary society.

To Mr Tam, film production and critique writing are creative activities demanding a proper balance between emotion and reasoning. Critical reviews should be written with a broad vision, astute observation and sincerity. Most importantly, it should inspire readers to think.

Ms Mao said that as local flavour is no longer apparent in Hong Kong movies, she hoped this trend could be reversed to enable audience to better understand modern Hong Kong society. 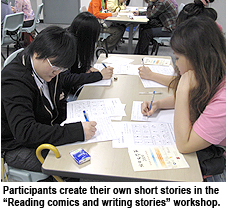 Since teenagers are particularly interested in comics, the Literary Festival has arranged a “Reading comics and writing stories” workshop. Comic frames drawn by cross-media artist, Mr Danny Yung Ning-tsun, were used in the workshop to inspire the participants’ creativity. They were asked to rearrange the sequence of the comics and come up with their own short stories and share them with the other guests.

Chan Sing-fan, a Year 3 student from the Department of Economics and Finance, spent time composing a story from the comics provided. “The frames seemed unrelated but after careful organisation they provided a solid framework for a story. After this workshop, I came to recognise that organisation and structure are important in helping readers understand the message conveyed in a piece of writing,” he said.

Besides participating in Literary Festival activities, the distinguished guests also served another major function for the Festival, as adjudicators of the City Literary Awards. The results will be announced in May.

The City Literary Festival is organised by CityU’s Cultural and Sports Committee, Chinese Civilisation Centre and the Department of Chinese, Translation and Linguistics, in collaboration with Hong Kong Arts Development Council and the Macao Foundation. This is the third year the Festival has received sponsorship from the Robert H. N. Ho Family Foundation.