Professor Way Kuo, President of City University of Hong Kong (CityU), made a key speech on 23 April at a seminar organised by the Tsinghua Alumni Association of Hong Kong. During his talk, Teaching and Research: Dispelling Common Misconceptions, Professor Kuo shared his research findings on the myths surrounding teaching and research in the university context to an audience of over 200, including Tsinghua alumni from mainland China and Taiwan, members of the CityU community and educators from various local universities. 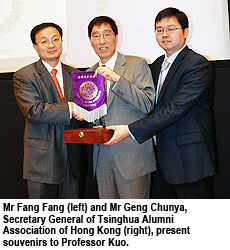 Mr Fang Fang, Chairman of Tsinghua Alumni Association of Hong Kong, delivered the welcome remarks, praising Professor Kuo, an alumnus of National Tsing Hua University who has taught extensively in the US, for his contribution to research in tertiary teaching, adopting a quantitative and qualitative analysis. “The two Tsinghua universities in mainland China and Taiwan plan to publish Professor Kuo’s study, Clarifying Some Myths of Teaching and Research. Professor Kuo will donate the royalties for use in scholarships.”

Professor Kuo told the audience he had delivered 27 talks on this subject, to an aggregate of more than 3,000 persons at universities in the US, South Korea, mainland China and Taiwan. Professor Kuo devoted the talk to his alma mater. “My talk is not meant to be controversial; rather, it aims to highlight empirical facts for discussion and judgment by all,” said Professor Kuo.

An educator for more than two decades, Professor Kuo has heard many concepts and arguments about tertiary teaching and research based upon little more than personal assumptions. He teamed up with educational psychologist Professor Mark E Troy, Associate Director, Measurement and Research Services, Texas A&M University, US, to study the subject. 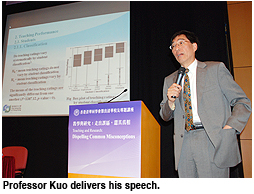 The two professors based their research on evaluations of teaching performance and research achievements of 400 faculty members over a five-year period, given out by more than 10,000 students of the university. “We had to obtain support from the university president and a committee of more than 20 members before we could gain access to the data,” said Professor Kuo, sharing his experience with the audience.

The study looked into the students’ evaluation feedback, faculty research funding and research productivity, and teaching performance versus research achievements.

Professor Kuo laced his speech with many interesting examples to illustrate his point. Talking about productivity, performance, and effectiveness, he cited Yao Ming, China’s top basketball player, as an example. “The super-tall basketball player can easily score by shooting, and that is his productivity. He makes many successful shots in a match, and that is his performance. Then, leading his team to the NBA championship would be a measure of his performance effectiveness,” he said.

Professor Kuo’s analysis and studies have revealed some interesting links between teaching and research. It is found that, for example, year one students gave the lowest evaluation to their teachers, while postgraduate students gave the highest. 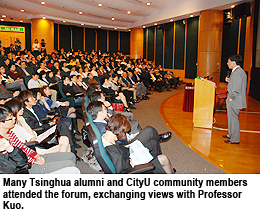 “Psychological analysis shows that the reason is the postgraduate students have a stronger sense of belonging after spending years on campus,” explained Professor Kuo. The studies found that assistant professors tended to receive higher evaluation than teaching staff from other categories, which he believes is a result of the closeness and easier communication between those younger professors and the young students. It was found that female students tended to be more generous in giving favorable feedback. Male and female teachers’ research productivity was very much the same.