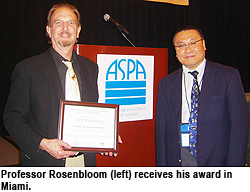 The pioneering contributions of a City University of Hong Kong (CityU) professor have landed him a coveted US award for Outstanding Scholarship in Public Sector Human Resources.

Professor David Rosenbloom, Chair Professor of Public Management in the Department of Public and Social Administration, was recently granted the Award for Outstanding Scholarship in Public Sector Human Resources by the Section on Personnel Administration and Labor Relations of the American Society for Public Administration (ASPA).

Professor Rosenbloom, who is among the first US scholars to conduct extensive research on the constitutional rights of public employees and on the politics of public personnel administration, was in Miami to accept his award at the 2009 conference of ASPA.

The award reflects a lifetime of achievement in his field. One of Professor Rosenbloom’s early works, Federal Service and the Constitution (1971), was cited by the US Supreme Court as an authoritative history of the free speech rights of public employees.

Professor Rosenbloom said the changes that had occurred in his career were dramatic. “Things we first advocated in the early 1970s, such as equal employment opportunities, were views at the time as being quite radical but public policy today is taking this area even further forward,” he said.

Professor Rosenbloom's Federal Equal Employment Opportunity (1977) remains one of the most comprehensive analysis of the development of equal employment opportunity programmes in the US federal government. He was also one of the first scholars to work in the area of representative bureaucracy.

Professor Rosenbloom received ASPA’s Dwight Waldo Award for Outstanding Contributions to the Literature and Leadership of Public Administration through an Extended Career in 1999.