The Hong Kong International Film Festival is held from mid-March to mid-April every year, during which scores of local and overseas films are shown. The works of five students and a teacher from the School of Creative Media (SCM) at City University of Hong Kong (CityU) will be showcased at this year’s 33rd Film Festival. 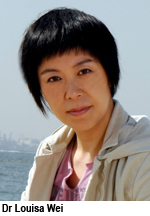 Storm Under the Sun, jointly directed by

Dr Louisa Wei Shiyu, Assistant Professor of SCM, and Ms Peng Xiaolian, will be shown in Hong Kong for the first time and a panel discussion on the film held after the show. Four works created by graduates of the school were also scheduled to be featured in an associate programme entitled “The Devil’s Playground - Joint Universities Programme”. The film by Lam Sheung-ting, a Year 2 student of the school, was scheduled to be shown as part of the festival’s 4th Fresh Wave Short Film Competition programme.

Storm Under the Sun is the first film about the so-called “case of Hu Feng’s counter-revolutionary clique” in mainland China. It covers 80 years of Chinese history spanning from 1927 when Mr Hu Feng, a famous literary theorist and poet, joined the revolution up to the present day. Dr Wei said much effort had been made in gathering information to produce this film. Interviewing people involved in the case also proved a big challenge as the interviewees were all old and feeble, and one had to race against time. “The audience has the rare opportunity to watch a historical documentary about this piece of forgotten history from a new perspective,” said Dr Wei. 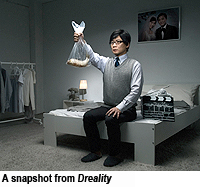 Directed by Mok Man-ho, Dreality tells the story of a typical office worker who lives an ordinary dull life, forgetful of all his youthful dreams about filmmaking. When he gets home after work one day, he finds his wife has disappeared. During his subsequent search for her, his long lost dreams about movie-making gradually resurface. “This film is intended to expose the opposition between reality and dreams and to serve as an alert for myself and those who have dreams, reminding us not to give up on our dreams,” said Mok Man-ho.

The film Hold My Hand, Whatever Happens Again, directed by Chow Tsz-kwan, is a story probing the relationship between a father and his autistic daughter. Chow said she was inspired to make this film by the love of parents devoted to their child after she saw a family walking hand in hand. “I understand that parents hold their children’s hand because they want to lead the way but what I wonder is whether the children can keep pace with their parents. I hope people will be encouraged by the film to think about this issue,” Chow Tsz-kwan said.

Lam Sheung-ting, a Year 2 SCM student, won the Best Film award at the 4th Fresh Wave Short Film Competition for his production, Merry Christmas. In creating his film, Lam Sheung-ting drew upon daily life experiences and merged them into his creation. Merry Christmas portrays a story of a scriptwriter coming across a young girl engaged in prostitution activities under the guise of compensated dating. Her experience prompts the scriptwriter to pen a story about her. During this creative process, the scriptwriter’s mother suffers from Alzheimer’s disease and the delusion that the father of the scriptwriter has returned to their family. This compels the scriptwriter to direct his anger and memories of his father into the story about the young girl.

Lam Sheung-ting majored in Cinematic Arts Studio at SCM, where he said he learnt all the requisite production skills including scriptwriting, editing, directing and filming. He had the opportunity in this contest to fully utilise all these skills.

From preparation to post-production, Lam Sheung-ting spent three months working on the project. He was thankful for his teachers and classmates’ valuable contribution throughout the production. He also learnt how to communicate with others, as the production of a film is heavily reliant on teamwork.

The awarded films and other works of CityU’s students will be showcased in the 33rd Hong Kong International Film Festival. Details can be found at http://www.hkiff.org.hk.