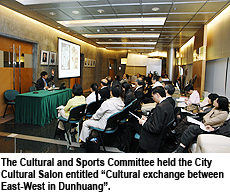 On behalf of CityU, Professor Cheng Pei-kai, Director of the Chinese Civilisation Centre and Chairman of the Cultural and Sports Committee, presented a souvenir to Professor Rong and delivered the welcoming speech. "Professor Rong has just conducted a course of 12 lectures on Dunhuang and the Silk Road for the Centre and imparted inspiring knowledge to our students. Tonight he will share his research with us by condensing it into a one hour presentation," said Professor Cheng.

Dunhuang culture, with a history dating back more than 2,000 years, was the product of interaction and exchange between various eastern 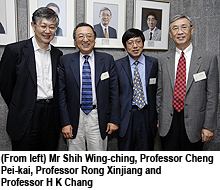 and western cultures linked by the Silk Road. With Dunhuang and the Silk Road so closely related, Professor Rong described one-by-one the historic locations and sites along the Silk Road, including Tulufan, the ancient Kingdom of Khotan, Sogdiana and the ancient Chinese capitals of Changan and Luoyang. He also showed photos of archeological excavations on the Silk Road. While listening to Professor Rong’s explanations, the audience could look at the photos and catch a glimpse of the difficulties presented by the excavation process. Publications written by Professor Rong were also on display during the salon.

"There is now a rich collection of excavated items representing Dunhuang culture. Through the study of these precious items, we can build a multi-dimensional view of the city of Dunhuang on the Silk Road," said Professor Rong. 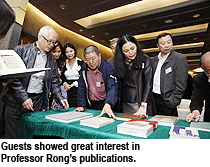 Professor H K Chang, former President of CityU, and Mr Shih Wing-ching, Chairman of the Centaline Group, also attended the salon. After Professor Rong’s talk, Professor Chang pointed out that there is a close relationship between economics, culture and religion, as cultural and religious research and development needs the support of funding. Professor Rong shared the same view.

Professor Rong, Professor of the Department of History and the Centre for Research on Ancient Chinese History at Peking University, served as a Visiting Professor of CityU’s Chinese Civilisation Centre for this semester.