By building a virtual academic community and bringing promising young scholars from the mainland to City University of Hong Kong (CityU), the Department of Media and Communication is consolidating its leading role in communication education and research in Greater China. 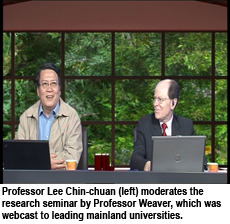 The live webcast seminars are part of a project the department is implementing to build a virtual academic community to share resources with mainland scholars via online platforms. Participating faculty members and graduate students interacted with Professor Weaver online through MSN, email and chatrooms.

“This project helps advance mass communication research in the region by linking Hong Kong and mainland students and academics with the international scholarly community,” said Dr Joe He, Associate Head of the Department.

“We will set up a regular mechanism to broadcast seminars by eminent scholars and are also planning to establish an interactive video-conferencing system with eight of the top 10 universities in China,” he added. 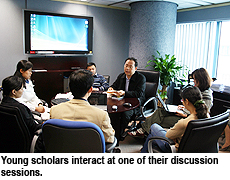 In another move to strengthen academic links with Chinese universities, the department collaborated with the Centre for Communication Research to initiate the Programme for Young Scholars from the Mainland five years ago. It brings young scholars of promise closer to the international landscape of communication research.

This year sees 16 young scholars visit CityU for one month and for the first time a graduate student from Taiwan has joined the programme. They were introduced to communication theories and research methodology as well as research projects undertaken by the department.

Professor Lee Chin-chuan, Acting Head of the Department, said the programme serves as a bridge connecting scholars from Greater China with the world.

“Through the programme these young scholars are exposed to the latest trends in communication from around the world and this will have an impact on media education in China,” Professor Lee said.

Participants Liu Yunfeng, Head of the Department of Communication at Nankai University, and Xiao Qing, from Yunnan Normal University, praised the programme.

“CityU places a lot of emphasis on empirical research and fieldwork, and the research methodology is more formal here. This has brought a new perspective to us, as mainland universities do not usually attach as much importance to these practices,” Liu Yunfeng said. He intends to introduce these practices in his own research as well as to students.

Echoing his views, Xiao Qing said interaction with CityU academics has benefited both her research and teaching. “Communication education has a relatively short history in mainland China and its development in Yunan is even less established as it is a border province. What I have learned at CityU is very useful in helping our students raise their standards and increase their competitiveness,” she said.

Graduate student from Taiwan’s National Chengchi University, Hsiung Pei-ling, said the programme truly encourages academic exchange in communication study and research between Hong Kong, the mainland and Taiwan. “I have come to understand much more about the history and development of communication in Hong Kong and on the mainland, which has stimulated my interest to conduct more research,” she said.