If you heard people greeting each other with “Kung Hei Fat Choi” on the evening of 6 February, it definitely was the result of the Lunar New Year Fair organised by the Mainland and External Affairs Office (MEAO) CityU Buddy Scheme.

Students from different countries gathered at the Multi-function Hall in the Student Residence that evening. Even though the event was scheduled to start at 7pm, people were coming in to sate their curiosity before it even began. As an introduction to Chinese New Year culture, the fair included booths dedicated to writing Chinese couplets, poems and new year wishes, a Chinese culture quiz, red packets and traditional food preparing and tasting.

The fair enabled both local and non-local students to experience Chinese culture and tradition. In the traditional food preparing and tasting

booth, we had an opportunity to taste the savoury traditional Chinese

turnip cakes and radish cakes. We also tested our cooking talent by trying 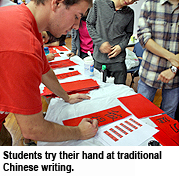 In the “Write Your Own Spring Couplets” booth, we tried to master traditional Chinese writing. Some of us even unearthed our potential in Chinese calligraphy. In the “New Year Wishes” booth, we could grab all kinds of Chinese snacks and candies after writing down our wishes. The most popular booth was the “Chinese Culture Quiz” counter. The queue was so long that we had to be patient and wait for our turn. By answering the questions, we showed our exceptional knowledge and awareness of Chinese culture and got chocolates as awards. Moreover, a “God of Wealth” played by a student 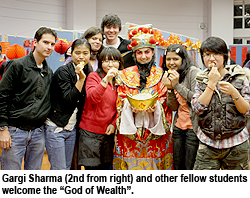 mingled with the crowd and distributed golden coins.

In addition to eating and playing, we also enjoyed a very informative night. Exchange students from different countries, including Pakistan, Maldives and Poland, shared their cultural traits with us. A student from Poland told us that before celebrating the Spring Festival in Poland, there is a tradition of clashing boiled eggs against each other. The person whose egg does not break is the winner.

It was a wonderful night. Through this fair, we had the chance to better understand traditional Chinese festival culture and also the traditions of different countries around the world within the short span of just two hours.