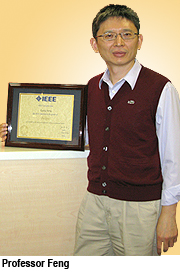 The IEEE, or Institute of Electrical and Electronics Engineers, is the world's leading professional association for the advancement of electronics technology, and comprises elite experts from around the world. control systems by exploiting the advantages of both fuzzy logic and conventional control technology.

In light of his contributions to evolutionary optimisation in industrial electronics, Professor Man has been elected to the grade of IEEE Fellow. He has developed a computational framework that enables industrial engineers to furnish engineering designs that are governed by multiple performance requirements. This surpasses the old method as it lightens the weight of numeric calculations that would have proven prohibitive in some mathematically intangible confinements. "In this way, many obstacles for design engineers can now be removed due to easy access to low-cost but fast computers. The method of Evolutionary Optimisation brings design benefits to areas including antenna designs, radio frequency devices, control systems, signal processing, wireless and computer networking, and many others applications as it allows more data to be processed in a more effective manner," said Professor Man. 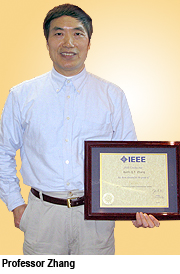 Similarly, Professor Zhang’s tremendous contribution to improving wireless communication systems has made him the third CityU scholar to be named an IEEE Fellow this year. His recent research on the 4th-generation wireless communication technology supports multimedia services, mobile TV, HDTV and digital video broadcasting. His work has focused on the physical layer, an operational environment for communication networks. His major contributions include solving a long-standing obstacle by devising a simple-design formula for fading Rayleigh channels, and establishing general techniques for evaluating the reliability of wireless transmission.

"I am happy my contribution has been recognised, and will continue to work in this field as it is both my interest and profession," Professor Zhang concluded.

The three professors are grateful to CityU for providing them with the ideal opportunities that encourage both research and teaching.

The IEEE looks to its membership of Fellows for guidance and leadership as the world of electrical and electronic technology continues to evolve. It is a non-profit organisation.