The Language Information Sciences Research Centre of the City University of Hong Kong (CityU) has released the 8th Annual Pan-Chinese Celebrity Rosters for 2007. This year's rosters mark a transition of power and leadership around the world. 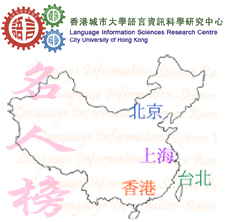 The Pan-Chinese roster (column A) has accommodated 21 celebrities this year, which is about a 20% drop compared with last year's. Of the 21 identities, political figures have occupied 18. This year's Pan-Chinese roster is most remarkable for its highlighting of changes in global leadership.

Sports figures are less prominent this year, despite the approaching Beijing Olympics, though the seemingly invincible Yao Ming made it onto the roster for the seventh consecutive year.

The Hong Kong roster comprises just 40% local celebrities. Thanks to the Legco by-election, Anson Chan and Regina Ip have gained as much media exposure, making it to second and third respectively on the regional roster headed by Donald Tsang. Andy Lau and Lydia Shum continue to represent showbiz. Meanwhile, the appearance of Alan Leong, Tsui Po-ko, Paul Morris, and Nina Kung’s on the roster owes much to several newsworthy incidents in Hong Kong last year.

Full details of the Annual Celebrity Rosters can be found at http://www.livac.org/celebrity/.