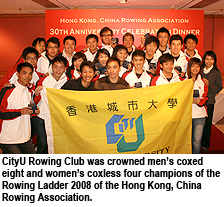 The rowing teams were ranked according to the sum of points they earned in designated events and regattas within this year. For the men's division, there were nine such matches, including events at the Shing Mun River and Verdant River regattas and the 30th Hong Kong Rowing Championships. CityU Rowing Club men's team won two gold, one silver and one bronze medal in total, accumulating 46 points to grasp the champion's title in the men's coxed eight.

For the women's division, the calculation was based on results in five events at the Shing Mun River Regatta and the 30th Hong Kong Rowing Championships. CityU Rowing Club women's team won three golds, one silver and a fourth place in total, earning 24 points altogether to win the champion's title in the women's coxless four. These outstanding results demonstrate the excellent sporting talent among CityU students.

CityU's team leaders said the good result was due to the hard work and perseverance of all the teammates. All of them continued training throughout the summer holiday to maintain a good condition for the competition. Such training ensured that their skills and physical endurance surpassed those of their rival teams. The ardent support of coaches, alumni and the University also played an important role.

Ivan Wu Cheong-fung, a Year 3 student of the Department of Building and Construction, is captain of the men's team. He said those who participated in men's coxed eight had worked closely together for two years, which helped them perform to their full potential. "The men's coxed eight relied heavily on good teamwork and team spirit. We always practiced together and try to work as one," said Ivan. "We would also like to thank the University for supporting us in providing the equipment."

The women's team captain, Lee Hoi-sin, is a Year 3 student of the Department of Building and Construction. She said all members are very devoted, work to a comprehensive training plan, adopt a sound technique and retain good fitness. She and her teammate, Wong Yee-mei, have rowed together for nearly five years and developed a good understanding with each other. They were responsible for tutoring their younger teammates and acted as a bridge between the coaches and team. "Our goal is to achieve a better result in the Universities Rowing Championships to vindicate the support of our fans," said Lee Hoi-sin.