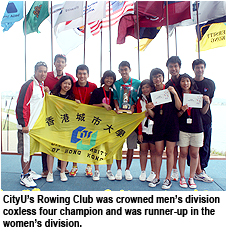 The Rowing Club of City University of Hong Kong (CityU) had a hugely successful regatta in Malaysia's UNITEN Rowing Invitational 2008, winning the championship in the men's division coxless four race and claiming the silver medal in the women's division. Tsui Kam-hung, a Year two student of the Department of Economics and Finance, was the runner-up in the men's single scull.

Co-organised by the University of Tenaga Nasional and the Malaysian Rowing Association, 15 universities from Malaysia and Hong Kong competed in the event held from 7 August to 10 August. CityU's Rowing Club sent 14 men and nine women to the competition. In the men's and women's coxless fours, they were up against 14 other teams and managed to rank first in the heats en-route to the finals. Tsui Kam-hung also ranked first in the heat ahead of the final. These brilliant results demonstrate the excellent sporting capabilities of CityU students. 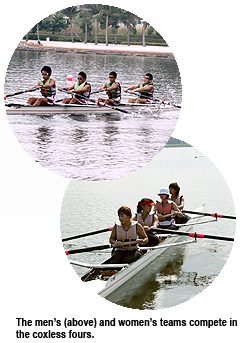 Ron Yeung Chun-wa, a recent Associate of Business Administration in Accountancy graduate, is captain of the men's team. He said the Rowing Club participated in 10 to 15 regattas each academic year. They practiced twice a week on Shing Mun River but during the summer holidays, they stepped up their training to four to six hours daily to improve their strength and teamwork.

"Though the equipment in Malaysia was not as good as that in Hong Kong, with our tough training preparation, we adapted quickly. We had worked together closely for a year, which really helped us to perform well," Ron said.

Lee Hoi-sin, a Year 3 student of the Department of Building and Construction, is captain of the women's team. The good result was beyond her expectations and came about, she said, from the uncanny understanding among teammates. "Cooperation between team members is the key to rowing success. Each rower needs to have full confidence in the other. Besides training, we arrange different social activities to improve our rapport," she said.

Tsui Kam-hung said participating in overseas competition was a valuable experience as it broadened his horizons and taught him more about himself. "I believe that when you work hard, you reap the dividends. Through this competition I have learnt that I need to improve my physical fitness and technique, so I will increase my training regimen," he said.