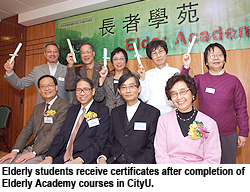 Thirty-eight diligent elderly students received certificates from City University of Hong Kong (CityU) at a ceremony on 10 December, after completing their Elderly Academy courses this semester.

The Elderly Academy established by CityU this September is an initiative of the Elderly Commission and the Labour and Welfare Bureau to provide an opportunity for senior citizens to enjoy learning as a student. Aged 64 on the average, the students who enrolled last September studied alongside CityU undergraduates, taking courses in Chinese language and culture, social studies, computing and management. 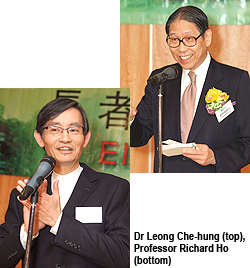 Dr Leong Che-hung, Chairman of the Elderly Commission, extended congratulations to the elderly students on their successful completion of courses as the first cohort of graduates in the Elderly Academy programme. “We have several Elderly Academies set up across Hong Kong, but CityU is the first institution to open its undergraduate courses to the elderly and let them study with regular students.”

“Such an arrangement not only exposes the elderly students to more advanced course materials but also enables them to mix with young people, so that they learn from one another. The young can gain from the seniors’ valuable life experience, while the elderly can take in new ideas from the younger generation,” Dr Leong said. He added that the success of the Elderly Academy is attributable to the support of CityU and many organisations and government departments.

Professor Richard Ho Yan-ki, CityU’s Provost, also praised the elderly students for their completion of the courses. “I hope you’ll go on to take any courses you like after finishing our programme here because, at your age, you have greater flexibility in pursuing your desired goals,” he said. Professor Ho also thanked CityU’s faculty members for their efforts in designing and teaching the courses. 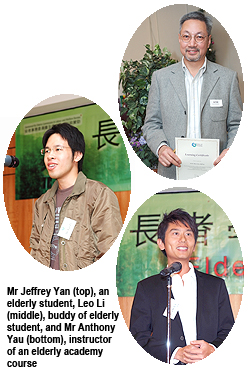 Mr Jeffrey Yan Shiu-lun, one of the elderly students, said at the ceremony that it had been many years since he last attended school and his own children had all completed their university studies. His wife who was overseas was quite surprised when he phoned to tell her that he had just enrolled in CityU’s courses and was going to study together with young students.

Jeffrey said, “It felt strange when I was back to studies, as the ambience was quite different from what it used to be in my days. However, when I started to join class discussions and group projects, I felt young again and came to see that learning is not restricted by age.” He has made friends with students of various ages while studying at CityU.

Although elderly students were not required to submit assignments, he added, they voluntarily worked on group projects to enhance their studies. In the process, he had a lot of opportunities to apply critical thinking and practise research.

Leo Li Chi-kong, an undergraduate at the Department of Management Sciences, served as a mentor to the seniors, helping them adapt to university life. “Contrarily, it is the seniors who helped me like my tutors, as they shared a lot of their knowledge about life and work. For example, one of them, who had worked in the tourist industry, told me a lot about the trade, which will be useful to my future career development.”

Mr Anthony Yau Muk-leung, Instructor at the Department of Applied Social Studies, taught a course for the elderly students. He was glad to have worked for the Elderly Academy, saying the participation of senior citizens has enriched the learning experience of all those attending the class. “In class, I’d be even more motivated in my teaching whenever I saw the eager eyes and endearing smiles of the seniors,” said Mr Yau.

New CityU academy welcomes the elderly back to class