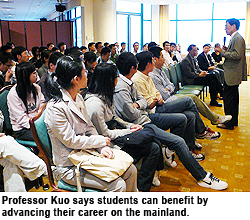 Professor Kuo invited students to ask him questions as soon as the meeting began. The gathering of more than one hour was conducted in a very relaxed atmosphere, covering diverse topics such as prospects for higher degree graduates, the development of CityU and career opportunities in the mainland.

Some students felt anxious about their future beyond graduation and were not sure whether they should join the work force or engage in research. Professor Kuo advised they could gain some work experience first if they did not have a concrete research plan. “There will always be opportunities to return to the academic field as long as you have a good track record at work. Actually, an industrial background will benefit theoretic research, as the two work hand-in-hand,” said Professor Kuo.

On the subject of research and application, Professor Kuo pointed out that CityU is always committed to research for the well-being of Hong Kong, the mainland and the world.

Zhang May-may, a postgraduate student majoring in comparative literature at the Department of Chinese, Translation and Linguistics, asked about CityU’s plans regarding humanities studies, as she worried the University might pay less attention to this field. Professor Kuo replied that the development of humanities studies had been one of his priorities since assuming the presidency and reassured students that measures to expand the humanities course selection were underway, for example, setting up an academic unit under the Chinese Civilisation Centre. He added that the University has been recruiting outstanding academics through various channels to strengthen the humanities and other disciplines.

Professor Kuo further pointed out that teaching is as important as research. “The first award I received was for teaching and it has been my most gratifying award.” He hoped CityU could fully utilise its strengths and at the same time improve its weaknesses in the coming year.

Professor Kuo reminded students to consider returning to the mainland for career development. CityU graduates he met in Shanghai were doing very well in their careers, he said. The remuneration packages offered on the mainland might not be comparable with those in Hong Kong at present but there would be more room for future development on the mainland. “The mainland is making quantum leaps and you may have the opportunity to fully apply your skills,” he said.

Tao Chao-hai, a PhD student at the Department of Building and Construction and President of the Chinese Students and Scholars Association of CityU, said the gathering offered a valuable opportunity for him to learn from Professor Kuo’s personal experience. “I thought Professor Kuo was a very serious person but he is actually very friendly and has a good sense of humour that ensured our discussion was lively.” He hoped more sessions could be arranged with senior management and experts.