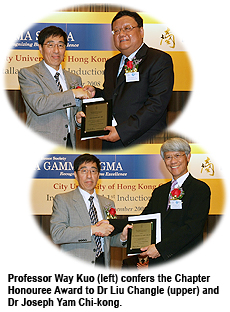 Beta Gamma Sigma is a society accredited by the Association to Advance Collegiate Schools of Business (AACSB) International, which invites outstanding business schools to establish collegiate chapters. The installation of the CityU Chapter of Beta Gamma Sigma recognises the excellent quality of the College of Business and reinforces the College’s status as a truly international-standard business school. 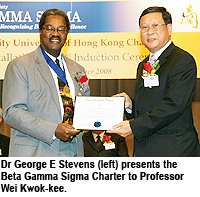 Professor Wei said it was a great honour for the College of Business to be invited by Beta Gamma Sigma, an internationally prestigious society, to establish a collegiate chapter. “The installation of the CityU Chapter highlights the excellent teaching and research performance of the College and its deserved international reputation,” he said.

Dr George E Stevens said he was delighted to endorse the establishment of CityU Beta Gamma Sigma Chapter. The programmes offered by the College of Business at CityU were of an excellent standard and helped students develop a global perspective and prepared them for tomorrow, he added.

Professor Wei said the College is committed to enhancing academic performance and fostering collaborations with outstanding business schools worldwide, such as the University of California, Berkeley (UC Berkeley) and Tsinghua University. With the establishment of the CityU Chapter of Beta Gamma Sigma, the College will put more resources towards expanding student exchange programmes. The number of exchange students has increased by nearly 70%, from 180 students in 2007 to 300 students this year. The College plans to provide more exchange opportunities to enhance students’ personal and professional development and broaden their global horizons. 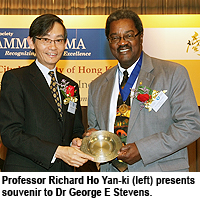 There are 192 members in CityU Chapter of Beta Gamma Sigma, including BBA, MBA, and EMBA students. They will be invited to join activities organised by the chapter, such as CEO forums and mentorship programmes.

Jenny Chan Pik-ha, CEO of Lippo Securities Ltd, is a CityU EMBA Year 2 student and has been working in the securities and finance industry for nearly 20 years. In October, Jenny travelled to UC Berkeley to complete a two week executive leadership programme, and engage with managerial staff from international corporations such as Boeing and Microsoft. “Beta Gamma Sigma is a distinguished society with many top universities having established collegiate chapters. It provides a very good network for exchange with business elites and I can learn from their experiences,” Jenny said. 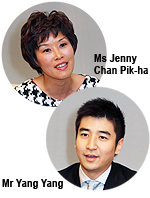 Yang Yang is a 2008 First Class Honours graduate of Bachelor of Business Administration (Honours) in Electronic Commerce and is an inaugural member of the chapter. “It is a valuable opportunity for fresh graduates,” he said.

In his second year of studies, Yang went to San José State University in Silicon Valley, US. He studied with staff from Apple and Google. Yang and his San José State University classmates joined a marketing strategic plan competition and were awarded third place. “The exchange experience gained in Silicon Valley broadened my horizons and instilled self-confidence,” Yang said.

“Beta”, “Gamma” and “Sigma” are Greek letters, standing for honour, wisdom and earnestness. Beta Gamma Sigma was founded in 1913 and memberships are awarded to outstanding business students worldwide. It now has more than 540,000 members in more than 170 countries. The CityU Chapter of Beta Gamma Sigma is the third collegiate chapter in Hong Kong.

CityU's College of Business is the only business school in the Greater China region to be triple-accredited by the three leading internationally recognised business education accreditation agencies, AACSB International, EQUIS and AMBA.