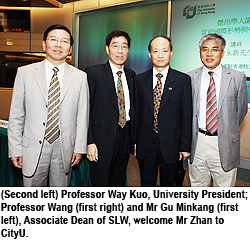 The School of Law at City University of Hong Kong (CityU) hosted a talk on 19 November entitled "Current International Situation and Chinese Diplomacy" featuring as speaker Mr Zhan Yongxin, Deputy Commissioner of the Ministry of Foreign Affairs of the People Republic of China (PRC) in the Hong Kong Special Administrative Region (HKSAR).

The lecture was held under the aegis of the CityU School of Law's Eminent Speakers Lecture Series. Mr Zhan analysed several aspects of the current international situation, including relationships between various countries, international issues and global economic concerns. He also discussed China's stance on major issues and the role of its diplomacy in global politics. CityU has always maintained close ties with mainland China and Mr Zhan's visit will further improve the faculty and students' understanding of Chinese affairs.

"Through the talk, students will gain a better grasp of international politics and economic development and widen their knowledge of Chinese diplomacy. This helps to broaden their horizons and will benefit their future career," said Professor Wang Guiguo, Dean of the School of Law of CityU. 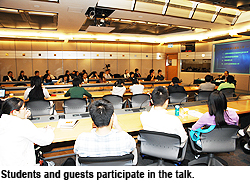 Mr Zhan said that, thanks to globalization, all countries are more interdependent than ever, and have to confront many difficulties together, including financial crisis, international terrorism, nuclear proliferation, energy and food shortages, climate change and environmental issues. All these problems are interwoven and complicated. "Autonomy, peace and cooperation are the three principles governing China's diplomacy. When China tackles those problems, it will try to formulate solutions with an overall view of the broader picture," said Mr Zhan.

Mr Zhan, an expert on International Relations and Hong Kong Affairs, graduated from Peking University. He has served in the Ministry of Foreign Affairs (MOFA) for more than 20 years. He was Third Secretary in the Office of Hong Kong and Macau Affairs of the MOFA in late 1980s, before moving to work with the Sino-British Joint Liaison Group. From 1994 to 1996 he was Second Secretary in the Department of International Organisations and Conferences of MOFA. From 1996 to 2002 he served as Second Secretary, First Secretary and Counsellor in the Embassy of PRC in Canada. After that, he spent another five years in MOFA’s Department of Policy Planning as Deputy Director-General. In September 2007 he became Deputy Commissioner of the Office of the Commissioner of MOFA of PRC in the HKSAR.