The lecture, being part of the University's 25th Anniversary celebration programme, was organized by the Office of the Vice-President (Research) to enhance academic ambience and stimulate intellectual vitality by providing a platform for the university community and society to meet and talk with distinguished scholars. 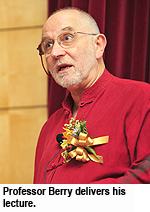 Professor Berry, Melville Wills Professor of Physics (Emeritus) from the Department of Physics at the Bristol University, UK, is well-known for his studies in the topological aspects of wave motion in classical and quantum mechanics. He is famous, among other things, for his discovery of a central concept in quantum mechanics and optics, the Berry Phase. Professor Berry is a recipient of many honours and prestigious awards, including the Maxwell Medal and Prize of the Institute of Physics, the Royal Medal of the Royal Society, the Paul Dirac Medal of the Institute of Physics, and the Wolf Prize in Physics. He belongs to several national academies and royal societies. For instance, he is an elected foreign member of the US National Academy of Sciences, a fellow of the Royal Society of London, and a member of the Royal Society of Sciences of Uppsala, Sweden. 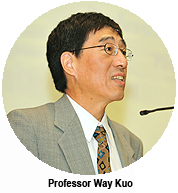 In his welcoming address, Professor Way Kuo, University President, described Professor Berry as a highly-regarded scholar in the international academic and research communities. "It is an honour for CityU to have such a famous and accomplished scholar on campus, whose presence enhances the intellectual atmosphere of the University, as well as that of Hong Kong," said Professor Kuo. He added that in celebrating the silver jubilee, the University will continue to host a series of Distinguished Lectures by world-renowned scholars.

The lecture focused on Hamilton's theory of Conical Refraction and subsequent developments in the study of the physics of light. Conical refraction is a striking optical effect predicted by Sir William Rowan Hamilton in 1832, occurring in crystals in which light travels in different directions 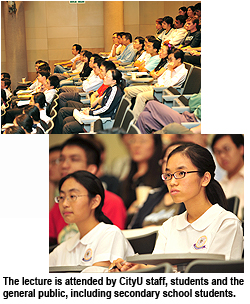 depending on its polarization. It was the first application of Hamilton's approach to optics and mechanics that later bore spectacular fruit as the basis for quantum theory. Today, conical refraction appears in a new perspective, as a prototype system, in modern singular optics. "Conical refraction is the first qualitatively new phenomenon predicted by mathematics," said Professor Berry.

In his lecture, Professor Berry shared with the audience his experience of measuring light beams through the refraction of a crystal and explained the different behaviour of light when it travels in different directions based on the foundation of Hamilton's theory. 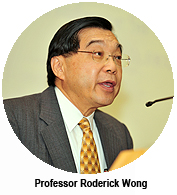 The lecture was concluded with a brief question and answer session facilitated by Professor Roderick Wong Sue-cheun, Vice-President (Research) and Dean of Graduate Studies.

For the benefit of CityU's students in Shenzhen and Suzhou, the lecture was broadcast live to the CityU Research Institute in Shenzhen, and the University of Science and Technology (USTC) of China - CityU Joint Advanced Research Centre in Suzhou.

During his visit to CityU, Professor Berry also shared his expert knowledge with staff and students in a colloquium on Tsunami Asymptotics organised by the Department of Mathematics on 3 November.