The Chinese Civilisation Centre (CCIV) of City University of Hong Kong (CityU) is holding an exhibition of Sichuan Shadow Show at CityU Gallery from 31 October to 14 December, featuring about 200 items of theatrical articles. The exhibition is part of CCIV's efforts to promote Chinese cultural heritage and its preservation. 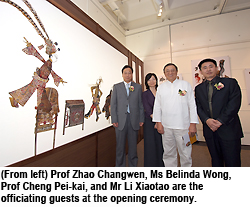 The more than 200 ox-hide exhibits include theatrical masks (some complete with moustaches and beards), backdrops for stage scenes and animal and flower patterns. Also on show are hand-written copies of scripts dating back centuries and various tools for making puppets and other articles for shadow puppetry shows. The items are part of the Shadow Show collection of Sichuan University Museum, shipped from mainland China to Hong Kong especially for this unique exhibition jointly held by the museum and CityU. The exhibition reaffirms CityU's commitment to the ideal of liberal education.

Shadow shows used to be popular in Sichuan, China but have now disappeared, said Prof Cheng, stressing the great value of the exhibits from Sichuan University Museum. Many of those on show at CityU have never before been displayed. 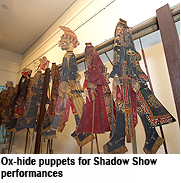 In his speech, Prof Zhao emphasised the significance of the exhibition. "As a form of folk art, shadow shows were in the past loved by the common people. It is important that students, faculty and many others can get a glimpse of the history and culture that this art represents."

Shadow shows present drama with puppets that project shadows on a screen. The genre was first seen in China, giving it the title of "Home of Shadow Shows". The shadow show in Sichuan Province uses puppets made of translucent ox-hide, carved and painted in the vein of the Sichuan Opera, and ranks as the best shadow shows in China.

Sichuan University Museum houses a collection of shadow show articles dating back to the later decades of the Qing Dynasty (1644-1911) and the Republican years (1911-1949). Well-preserved, the exhibits on show at CityU Gallery display exquisite carving and painting, and are of great importance to researchers and art lovers alike.

Of the articles, the series featuring “Ten Temples of Hell” are arguably the most eye-catching. They were used as backdrops for stage scenes of hell, where souls of the dead are tried and then awarded or punished according to their good deeds or evil doings. Also shown in these plates are scenes of life from the Qing Dynasty years, such as people gambling and smoking opium.

Also of interest are pieces representing episodes from history and folklore, and well-known story chapters that help form part of Chinese civilisation.

The Sichuan Shadow Show at CityU Gallery (Amenities Building, CityU) runs from 31 October to 14 December (10 am to 7 pm).