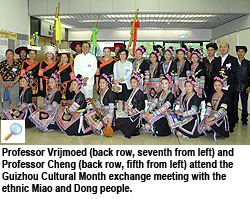 Guizhou cultural month has been staged by the Office of the Dean of Student Learning and other departments throughout October. Thirty members of the Miao and Dong ethnic groups staged a dance and music performance in their traditional costumes during the welcoming ceremony on 27 October. Guizhou Cultural Month was

co-organised by the Cultural & Sports Committee, School of Creative Media, Department of Asian and International Studies, Division of Building Science and Technology and Chinese Civilisation Centre. A series of exhibitions and lectures were held during the month.

Professor Vrijmoed thanked the Guizhou ethnic groups for exhibiting the distinct features of their traditional culture to CityU's staff and students. "Through this exchange activity, CityU's students have not only got an opportunity to take part in a field trip, but also a chance to reflect on the promotion and preservation of cultural heritage in general", she said.

"Ethnic cultures are particularly vulnerable to disappearance in the process of globalisation. This activity has provided students with an opportunity to deepen their knowledge of Chinese culture. I hope we can organise more events like this in the future to raise the students' awareness of cultural preservation," Professor Cheng said.

Mr. Lee expressed his thanks to CityU for organising the exchange activity and hoped more people would come to understand Guizhou culture through this activity.

The presiding guests then deposited four artworks, including traditional silverware, accessories and embroidery, into the exhibition box, symbolising that Guizhou culture had been brought into the CityU family.

Luk Ka-yan, a recent graduate of School of Creative Media, thought the Guizhou tour was a rare experience. She was glad the School recorded what they saw and heard at Dimen Village by means of various media, such as videos, photos and websites. Despite being on the road for more than 10 hours, students found the landscape of Guizhou beautiful, especially the layers of terraced fields. "I am really fascinated with Guizhou's scenery. The feeling of being surrounded and embraced by the terraced fields and mountain peaks is impressive. That is why I want to keep these precious scenes through my camera," she said.

Billy Chan Wing-ho, a student of Bachelor of Science (Hons) in Architectural Studies, has visited Guizhou twice. During the trips, he observed and studied the distinct local architecture. He also witnessed the rebuilding of the local Drum Tower and had the opportunity to discuss the rebuilding techniques with the local architects. The villagers adopted traditional methods, relying on hand-crafting from wood. "I came to understand the extent of the cultural influences on the architectural styles. I hope to learn more about Chinese architectural features from my subjects later on and apply what I learned in future architectural works in Hong Kong," he said.

Xiao Xinshan, a second-year student from the Department of Biology and Chemistry, took part in the Guizhou Cultural Exchange Tour organised by the Chinese Civilisation Centre, along with more than 20 students from other departments. During the tour, they observed the local ethnic cultures, especially those of Miao and Dong people, and visited local elementary schools. She found the Miao and Dong people welcoming and local children living simple, joyful lives. Guizhou's dietary culture impressed her as well. "Miao foods taste strong, salty and spicy. The local people also like to serve wine to guests during meals. It was a brand-new experience to dine with locals, though I was not used to it initially," said Xiao Xinshan.