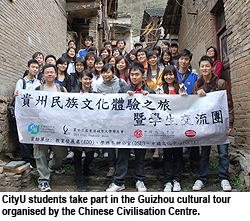 City University of Hong Kong (CityU) has designated an entire month towards the exploration of minority cultures in the southern mainland province of Guizhou.

October's Guizhou Cultural Month will see photo exhibitions and a range of seminars capitalise on ties forged during recent visits by CityU departmental representatives to villages in the province.

Professor Lilian Vrijmoed Kwan Lee-ping, Dean of Student Learning, emphasised that the culture of Guizhou was very diverse and made for a fascinating destination for CityU's students. She encouraged students to participate in field trips to Guizhou and the Guizhou Cultural Month provided an excellent opportunity to present the different aspects of this unique culture.

"This programme promotes interaction among various departments and allows students to showcase the results of their studies," said Professor Vrijmoed.

The programme was jointly organised by the Office of the Dean of Student Learning, Cultural and Sports Committee, School of Creative Media, Department of Asian and International Studies, Division of Building Science and Technology and Chinese Civilisation Centre of City U. 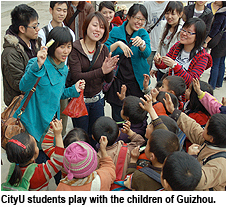 In the 2007-08 academic year, the School of Creative Media, Division of Building Science and Technology and Chinese Civilisation Centre had arranged various activities to allow their students to study the culture of Guizhou, from the perspective of their disciplines, by visiting the Miao and Dong ethnic groups and observing their culture and way of life. Students from the School of Creative Media captured images of daily life in the Dimen Village of Guizhou Province, including local farmers working in rice paddies, festival celebrations and the production of local handicrafts such as weaving, dyed clothes and embroidery.

Students from the Division of Building Science and Technology focused their attention on the architecture of the region and were privileged to exchange ideas with architects who rebuilt the local drum towers. During the visit, students had the opportunity to experience and understand the characteristics of traditional Chinese architecture derived from the Tang dynasty, as well as the unique drum tower structures of the Dong villages. The Chinese Civilisation Centre exchange group focused their studies on a comparison of the diverging cultures and beliefs of the majority Han and other minority races. They explored the cultural impact the contemporary minority races were facing and the difficulty of keeping their traditions alive.

Activities during Guizhou Cultural Month include exhibitions, seminars and minority cultural performances. The three academic departments mentioned above organised a photography exhibition earlier this month. Four seminars on conservation and promotion of Dong culture in Dimen Village will be held from 24 to 28 October. Thirty Guizhou ethnic minority members will be invited to stage a dance and music performance to offer a glimpse at Guizhou's cultural heritage.