Students enjoy chatting with the President 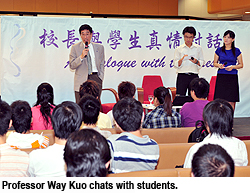 Professor Way Kuo, University President, met with more than a hundred students and chatted with them about the development of the University, student life on campus and the President’s diverse interests. The students showed a keen interest in the affairs of the University and its development, while the exchange of opinions and views once again emphasised Professor Kuo’s focus on communicating with students.

After an introduction that outlined Professor Kuo’s background and interests, students asked questions freely. Taking advantage of such a valuable opportunity, many students enquired issues such as campus development, University rankings and the prospects of graduates. 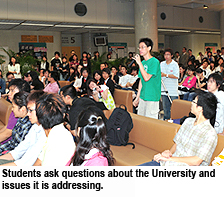 Daniel Man Ka-ming, a Year 3 student in the Department of Chinese, Translation and Linguistics, said the campus was over-crowded, leading to inadequate space for students to conduct their activities. He asked Professor Kuo if there would be any scope for improvement. In response, Professor Kuo said a special group had been set up to address the issue, which was being treated as a matter of priority.

Regarding prospects, Professor Kuo stressed that CityU graduates are all talented people with potential, and many of the alumni have gone on to senior roles in well-known universities in mainland China, while many others have become professors in US universities. 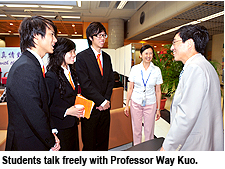 Professor Kuo thanked all the students for attending and raising questions. “I have always strived for more contact and communication with students, alumni and teaching staff since taking the presidency. The questions raised and the opinions expressed today are inspiring and at the same time reflect your concerns and passion for the University. I hope this dialogue will continue,” he said.

Student Daniel Man later said he had gained a more thorough understanding of the University through the conversation with Professor Kuo, and looked forward to similar exchanges in the future.