Mr Patrick Tam Ka-ming, Associate Professor of the School of Creative Media, has been selected as the first introductory director by the e-wave film festival, in recognition of his contribution to the industry. During the festival, held by the Hong Kong Film Archive of the Leisure and Cultural Services Department, many of Mr Tam’s major television productions are shown. He also hosted a seminar to share with the audience his bitter and sweet memories of a television career that started in the 1970s. 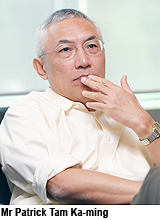 Joining the local television industry in 1970s, Mr Tam soon won the acclaim of critics for his strong personal style. He pursued his career in the movie industry in late 1980s in the varied roles of director, scriptwriter, editor, producer and art director on many films. Since joining CityU in 2000 he has taught courses on film directing and scriptwriting.

With a passion for teaching, Mr Tam felt that creativity was an essential element for both movie production and teaching. “I try different ways to stimulate the creativity of students. At the same time, I am also inspired by the students to come up with new creative ideas,” he said.

Mr Tam has never lost his enthusiasm for film production over the course of the past 30 years. His recent movie After This Our Exile, co-written by one of his students, garnered various awards from local and overseas film festivals. Thanks to his patient teaching and kind recommendations, a number of CityU graduates have joined the local movie industry and begun to gain public attention, including Christine To Chi-long, Heiward Mak Hei-yan and Dorothy Hui Ying-yin.

The film festival “e-wave: The TV films of Patrick Tam”, held from 19 September to 12 October, will show 20 films directed by Mr Tam between 1975 and 1977. For details, please visit http://www.lcsd.gov.hk/CE/CulturalService/filmprog/english/2008ewave/2008ew_index.html.