The School of Law (SLW) at City University of Hong Kong (CityU) hosted a lecture entitled “East Asian Economic Community: Prospects and Challenges” on 25 September. The guest speaker was Professor M Supperamaniam, Adjunct Professor of International Islamic University of Malaysia, and former ambassador and permanent representative of Malaysia to the World Trade Organisation in Geneva, Switzerland.

In her welcoming address, Ms Charu Sharma, Lecturer of SLW, 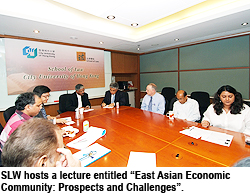 said, “We are very grateful to have Professor Supperamaniam, who is such a renowned economist, deliver this lecture for us. I am sure it will provide considerable insight into the regional economy.”

Professor Supperamaniam offered an analysis of the economic situation of China, Japan and South Korea, the three largest East Asian economies. “The five main factors driving the growth of East Asian economies are as follows: an increase in entrepreneurial activity in the region; undertaking economic reform that encompasses the free market system; market integration that improves the division of labour; the economic growth of China; and government policies that support trade and investment,” said Professor Supperamaniam. “As we can see, policy makers play an important role within the economic community.”

Professor Supperamaniam is Advisor to the Federation of Malaysian Manufacturers on WTO and FTA Negotiations, and also Permanent Advisor to 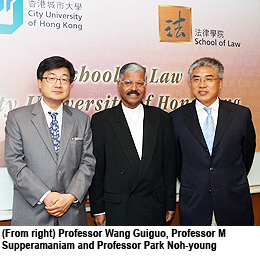 the Asia-Pacific Research and Training Network on Trade (ARTNet) coordinated by United Nations Economic and Social Commission for Asia and the Pacific (UNESCAP), based in Bangkok. He was Minister of the Ministry of International Trade and Industry of Malaysia, a department where he had worked for 33 years.