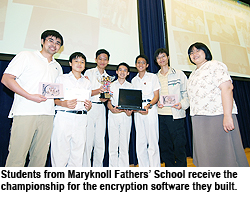 The summer activities organised by the Faculty of Science and Engineering at City University of Hong Kong (CityU) have helped secondary school students test their creativity in relation to scientific research. Some of the examples include examining the influence of music on appetite, making a semi-automatic life jacket for swimmers and fishermen, and building a new generation of automobiles that could better protect drivers.

The Project-based Outreach Programme 2008 successfully concluded on 20 September. Eight teams from six secondary schools presented their research projects. Between May and September, the participants conducted research in small groups on individual topics under the supervision of their school teachers, CityU’s students and professors.

A group of Form One students from Maryknoll Fathers’ School won the championship after building an encryption machine. When starting the project, they knew very little about encryption and had no programming experience. However, with the enthusiastic guidance of two CityU students and their own efforts, they eventually outperformed other teams to receive the top honour.

“We learnt about encryption and also teamwork,” said Chow Tin-nok, one of the team members. “We benefited greatly from the programme and are very interested in taking part in similar programmes in the future.”

Bert Leung Wing-pan and Tommy Yang Guomin, Department of Computer Science graduate students and “junior teachers” of the winning team, said they felt gratified to be able to help the secondary school students complete their winning project. “Our study at CityU has equipped us to guide them as they transform ideas into applications,” said Tommy.

It was the fourth consecutive year CityU had hosted the programme, which sets out to boost secondary school students’ interest in science and engineering. Professor Henry Chung Shu-hung, Associate Dean of the Faculty of Science and Engineering, said the programme provided opportunities for secondary school students to study various science and engineering topics outside the classroom and benefit from a meaningful summer holiday.