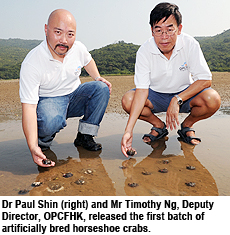 In a Hong Kong first, CityU and Hong Kong Ocean Park Conservation Foundation researchers have released captive-bred horseshoe crabs into the wild. The animals will now be tracked and their progress monitored in a bid to save the endangered species.

Twenty horseshoe crabs were released at Shui Hau, Lantau Island on 13 September, and researchers will visit the site regularly to monitor their progress. The project marks the first time in Hong Kong that captive-bred horseshoe crabs have been introduced to the natural environment and tracked.

The CityU research team is led by Dr Paul Shin Kam-shing and Dr Cheung Siu-gin, associate professors at CityU’s Department of Biology and Chemistry. CityU researchers have inserted chips into the bodies of the horseshoe crabs and will visit Shui Hau every two weeks during low tide and find the tracked horseshoe crabs to assess their progress. 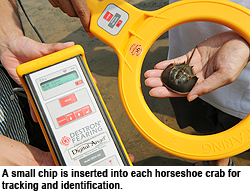 Two of the four existing species of horseshoe crab are found in Hong Kong. “In the last 10 years, the number of horseshoe crabs has dropped drastically,” said Dr Shin. “Captive breeding helps increase the horseshoe crab population and prevent extinction of this living fossil.”

The scientific name of the released horseshoe crab is Tachypleus tridentatus. It first evolved more than 400 million years ago. Its stature as a living fossil stems from the fact it has changed very little since its Paleozoic Era origins.

The bodies of young horseshoe crabs are very small. CityU researchers spent months seeking appropriately-sized chips. They also conducted tests to prevent the chips being shed during moulting. Another 15 horseshoe crabs will be released at the end of September. 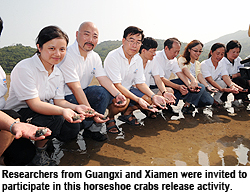 Usually a young horseshoe crab will moult (shed their shell) once or twice in its first year. Horseshoe crabs in the laboratory moult six times a year, indicating the faster growth rate of the captive-bred animals.

Coastal development and environmental pollution in Hong Kong have destroyed the habitat of horseshoe crabs over the past few decades, causing a decline in their reproduction and survival rates.

“There is no data on how many adult horseshoe crabs exist in the area. Also, no record of their reproduction in Hong Kong has been kept over the last 20-30 years,” said Dr Shin. “In fact, there are several mudflats in Deep Bay and Lantau Island, located near the confluence of sea and fresh water, which are rich in nutrients that juvenile horseshoe crabs need and are highly suitable habitats for their development. We have to protect this environment so horseshoe crabs can survive.”

Since 2006, CityU has teamed up with the Ocean Park Conversation Fund to work on the scientific research and conservation of horseshoe crabs. Major projects include collecting scientific data on the current plight of the creature in Hong Kong, promoting the need to include them as a protected species and enhancing public awareness on the need to protect horseshoe crabs and their habitat.