Turn one to four: show support to CityU

To promote a culture of caring and giving, the Development and Alumni Relations Office in 2005 coordinated the establishment of the City University of Hong Kong (CityU) Staff Giving Club (SGC) to encourage staff to make contributions. As of August 2008, approximately HK$7.2 million was raised, including the generous donations of about 1,000 staff and the Government’s corresponding matching grants.

The “We Love CityU” campaign, launched by DAO in January as part of its donation drive, has received overwhelming response from the CityU community members. It was also supported by Mr Herman Hu Shao-ming, member of the University Council and Chairman of Ryoden Development Ltd, who donated HK$1 million as an additional matching grant. As a result, each dollar donated by staff members will bring in another dollar from Mr Hu. When added to the Government’s matching grant scheme, the original $1 donation generates $4 for the University. Staff members can make use of Mr Wu’s matching grant to promote student development activities of their departments.

“As a member of the CityU community, it is an honour for me to serve as a matching donor of staff donations for the campaign. I hope I can contribute to the promotion of the caring culture of the University community,” Mr Hu said.

Dr Dennis Sun Tai-lun, Chairman of the University Council’s Community Relations Committee, is also a major sponsor of the “We Love CityU” campaign.

Professor Philippe G. Ciarlet, from the Department of Mathematics, is a founding supporter of SGC. Long before SGC was established, Professor Ciarlet had been making donations to support the development of CityU. “Any one of us is part of CityU, our ‘second home’. In this respect, donations constitute a very good way to effectively express our gratitude and sense of community,” said Professor Ciarlet.

In addition to personal support of SGC, all departments work hand-in-hand to promote the caring culture. Among them, CityU Extension has been one of the most enthusiastic departments. Ms Connie Ng Mei-ling, Administrative Officer of CityU Extension, is one of the 31 ambassadors from 30 departments who explains the importance of supporting SGC to colleagues and encourages them to contribute to CityU.

To give all members of CityU the opportunity to express their devotion to the University, the Council’s Community Relations Committee and the Development and Alumni Relations Office have recently introduced the “We Love CityU” 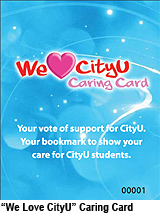 Caring Card. Students, staff and alumni may subscribe for a Caring Card by donating HK$25 to the University. As a token of appreciation, every Caring Card comes with a HK$12 dessert coupon and HK$20 dining coupon sponsored respectively by Maxim's Group and Shing Hin Catering Group. From September to December, “We Love CityU” Caring Card counters will be set up near the student canteen, iCafe, swimming pool and covered terrace. All funds raised will be used to support student development programmes, such as scholarships, bursaries and student activities.