In the meeting, Professor Kuo highlighted to the delegation the major items on the University agenda at present, including preparations for the four-year curriculum and invitations extended to experts to set up international advisory boards that offer advice on academic development and administrative matters.

The President said he would eventually like to see half of CityU’s undergraduates spend one semester studying on the mainland. 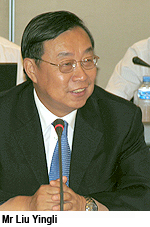 Mr Liu presented the major goals of the delegation, including plans to enhance communication with the HKSAR government and various commercial and community sectors in Hong Kong, hasten the progress of all projects between Shenzhen and Hong Kong due for completion by 2010 and foster the development of both cities. “There is close collaboration between CityU and Shenzhen and CityU has established its presence in Shenzhen at a relatively early stage. I believe Professor Kuo will continue to work hard in this area,” he said.

Professor Tong recapped some of the highlights of the relationship between CityU and Shenzhen over the years, including the establishment in 2001 of application-oriented laboratories in the mainland city and the expected completion of the CityU (Shenzhen) Research Institute Building within the next year. He hoped CityU could work even more closely with mainland universities and nurture more graduate students.

Professor Wong thanked the Shenzhen municipal government for providing assistance to CityU to encourage cooperation with Shenzhen on scientific research.

The delegation then visited the Applied Electromagnetic Laboratory at the Wireless Communications Research Centre to learn more about CityU’s research on the technologies of antenna and radio frequency identification (RFID).

The visit is a part of the three-day research activity of the Action Plan of Shenzhen-Hong Kong Innovation Circle 2008-2010. Hong Kong and Shenzhen signed an agreement last year to promote and boost full collaboration in technology research between the two cities, including exchange of personnel and sharing of resources.