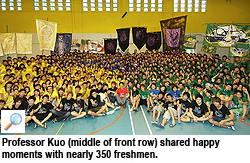 Professor Kuo was warmly welcomed by the freshmen with a hearty round of applause and he not only refereed the tug-of-war battle, but also took part in it.

This was Professor Kuo's first visit to the Orientation Camp. He thanked the Students' Union for organising this social activity and extended his welcome to all freshmen on behalf of staff and current students.

"In addition to working hard on your studies, you should also try to make friends with others. I encourage all of you to shake hands with other students and start developing these friendships," Professor Kuo said.

Professor Kuo said he is still in close contact with those friends he made back 40 years ago when he was a freshman at university. "I guarantee that the one you shake hands with now will provide great assistance to you in the future. I hope all of you will remember the friendships developed at CityU," Professor Kuo added. 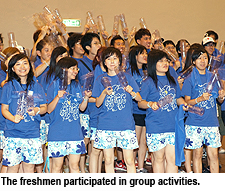 Divided into four colour-coded teams - yellow, purple, blue and green - the students gathered for a series of interactive games and had the opportunity to get to know each other and find out more about CityU. Andy Chu Ka-kit, President of the Students' Union, said Professor Kuo's attendance at the Orientation Camp had presented an excellent opportunity for the new students to learn more about the CityU President.

Kenny Tsoi Ka-hei, the Camp Leader, said that through participating in different interactive bonding games, they hoped students would develop both team spirit and an independent mindset.

Maggie Wong Pui, a freshman studying Applied Physics, said attending the Orientation Camp helped her learn more about CityU and make new friends from different departments. She was also pleased the University President attended the camp. "I was quite moved when I found that the President was wearing the camp uniform. He really showed a lot of friendliness towards the students," Maggie said.

The theme of this year's Orientation Camp was "The Adventure Ship". The theme represented new students coming aboard CityU in a manner akin to boarding a ship on a voyage of discovery.