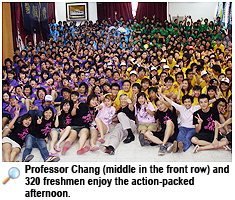 The occasion was the Students’ Union Orientation Camp on 2 September where 320 new CityU students had gathered for a series of interactive bonding games and team-building activities.

Divided into four colour-coded teams, the students had the opportunity to get to know each other, find out more about CityU and meet Professor Chang, who was attending his first student orientation at CityU.

“I’ve worked at CityU for 11 years and I thought I knew every nook and cranny on campus, but this is the first time I’ve been to this ‘secret corner’ and for that
I’m really happy to meet you all,” Professor Chang said. 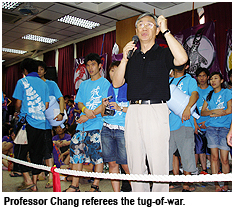 In fact, Professor Chang, who refereed the tug-of-war and led the students in the chant “CityU is Number One!” (城大頂呱呱), said the day had been one of the most memorable of his long career at CityU.

“I wish I could be one of you and become a new university student again!” he said.

Professor Chang told the students that balancing hard work with fun and free-time activities was a vital part of whole-person education. “When I was in primary school, the first chapter of my Chinese textbook was: ‘Go, go to study; come, come to play.’ After playing hard today, I hope you will go home and study hard,” he said.

Urging participants in the Orientation to think for themselves and make their own decision, Professor Chang related a story about a man in a hot-air balloon who had got lost. He spies a man passing by below on a bike and asks, “Can you tell me where I am?”

“You’re in a hot-air balloon,” comes the reply. 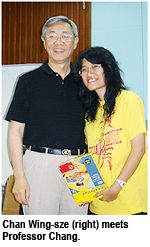 “You must be a university professor,” says the man in the balloon.

“How did you know?” says the man on the bike.

“Only a university professor would say something factually correct but utterly useless.”

Professor Chang told the students that they would have to decide for themselves how to define what was useful and what was not as they progressed through their university career and prepared for the world of work.

Kelvin Li Chun-fung, President of the SU, thanked Professor Chang for attending the camp and said the Orientation had been an excellent opportunity for the CityU President and the new first-year students to get to know one another in a friendly, informal environment.

Law Lun-yee, the Camp Leader, said she had been impressed by Professor Chang’s generosity for taking the time to come to the orientation and sponsoring refreshments.

Chan Wing-sze, a Year 1 business student, said she felt that Professor Chang really cared about the students. “He didn’t just lecture us with principles. He inspired us with interesting stories,” she said.