The lecture, given at the Run Run Shaw Library, was part of the Pearl River Delta and Yangtze River Distinguished Lecture series. 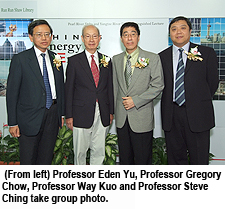 China’s emergence on the global stage has bought many opportunities to its populace but also presents some enormous ecological, environmental and economic challenges. Professor Chow’s lecture focused on the nature of the energy-related issues, including air and water pollution, energy shortages and carbon dioxide emissions in China.

“In spite of all the efforts of the Chinese people, like any nation experiencing rapid economic development, they are going to pay the cost of environmental degradation for some time to come,” Professor Chow said.

But the news was not all bad, according to Professor Chow’s conclusion.

According to Professor Chow, looking further into the future, one could be optimistic because of a positive income effect on the demand for a clean environment and of possible technological innovations in alternative clean energy. He said that the reduction in carbon dioxide emissions per capita could be expected because of the Environmental Kuznets Curve. The Kuznets Curve is the graphical representation of Simon Kuznets's theory ('Kuznets hypothesis') that economic inequality increases over time while a country is developing, then begins to decrease after a critical average income is attained.

Professor (Chair) Eden Yu Siu-hung, Head of Department of Economics and Finance, delivered the introductory remarks. Professor Yu welcomed Professor Chow and pointed out that this lecture was the second of its kind to be jointly organised by the Department of Economics and Finance and the Library, for researchers and policy-makers who were constantly looking for inspirations and innovative ideas. 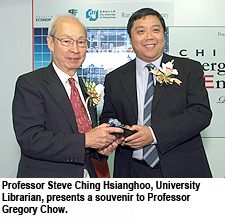 Professor Chow studied in the US at Cornell University and University of Chicago, where he earned his bachelor, master and doctoral degrees. Later he taught at MIT, Cornell University, Columbia University and other world-famous institutions. He is a world-renowned expert in China’s economy and an authority on econometrics. He is Professor of Economics at Princeton University and served as Chairman of the American Economic Association's Committee on Exchanges in Economics with the People's Republic of China from 1981 to 1994.

Professor Chow has made many contributions to several fields of economics, having authored and published 12 books and more than 200 articles. In the 1960s he devised the world-famous “Chow test”, which has become an important tool in econometrics. He also put forward the spectral methods and optimal control methods for the analysis of econometric models. The Econometric Research Program at Princeton University is renamed the Gregory C Chow Econometric Research Programme in his honour.