City University of Hong Kong (CityU) hosted an international symposium on Cross-cultural Perspectives on East Asian Cinemas from 3 July to 4 July, drawing together global experts from academia and the industry to enhance understanding of regional filmic culture.

The symposium serves to demonstrate CityU’s strength in cross-cultural studies and its efforts to generate discussion and interdisciplinary analysis. 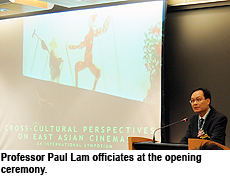 Cinema has developed into a still rapidly-expanding field of intellectual inquiry. In recent years, the study of Asian cinema has introduced new ways of understanding film, both as a popular cultural medium and a form of powerful social discourse. “This two-day symposium has provided a platform for international collaboration and cross-cultural dialogue between CityU and other Hong Kong and overseas academic communities as well as film industry professionals,” said Professor Lam in his welcoming speech.

“By bringing together established scholars from local and overseas institutions, the symposium aims to foster intellectual exchange in the study of the cinemas of Asia, particularly Chinese, Japanese and Korean cinema,” said Professor Webster. “In addition, the event aims to enhance interdisciplinary co-operation in new and emerging areas of knowledge related to the development of the new BA (Hons) in Cultural and Heritage Management. The programme will be offered by the Department of Chinese, Translation and Linguistics in 2009.”

The symposium was divided into five panels, each with a dedicated theme. In-depth discussions on genre, aesthetics, pan-Asian co-productions, history, gender and new directions in Asian cinema were conducted.

Hong Kong filmmaker Mr Cheung said that although the industry in Hong Kong faced challenges, “it is on the right track as filmmakers have maintained their creativity and productivity edge.”

Mr Ning’s film, Rainbow, was also broadcast at a special screening to mark the closure of the two-day event.