Professor (Chair) Li Ping from the Department of Electronic Engineering of City University of Hong Kong (CityU) has been invited to participate in a European Commission information and communication technology research project. 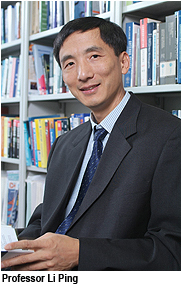 Professor Li will work with 13 universities, research institutions and technology companies from Germany, Denmark, Spain, France, Portugal, Britain, Cyprus and Canada in the Seventh Framework Programme for Research of the European Commission. The project has been granted funding of around €4 million (HK$48 million) by the European Commission.

The main objective of the research project, titled “WHERE” (Wireless Hybrid Enhanced Mobile Radio Estimators), is to combine wireless communications and navigation for the benefit of future (fourth generation) mobile radio systems. The project sets out to innovate the integration of communications and global positioning systems, as well as enhancing accuracy and reducing latency of wireless navigation systems.

The German Aerospace Centre is the research team coordinator. The project will last for three years, from 2008 to mid-2010.

Professor Li was invited because of his expertise in Interleave-Division Multiple-Access, which is a key wireless communication technology in developing the fourth generation mobile communication system. He will lead two CityU PhD students, Yuan Xiaojun and Geng Nian, in the research team that will provide expert comments on this technology and later submit a research report.

“The competition for European Commission research grants is highly competitive,” said Professor (Chair) Luk Kwai-man, Head of the Department of Electronic Engineering. “CityU is among the first batch of higher institutions in the Greater China region to participate in the Seventh Framework Programme for Research. This can be seen as an indication of the international reputation and quality of research at CityU.”

The Seventh Framework Programme for Research of the European Commission will last for seven years, from 2007 until 2013. The programme has a total budget of more than €50 billion. The money will be spent on research grants throughout Europe and beyond, in order to co-finance research, technological development and demonstration projects.