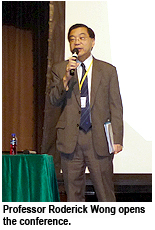 The conference, taking place from 16 June to 26 June, is co-organised by the Society for Foundations of Computational Mathematics and CityU. It is co-sponsored by the University’s Department of Mathematics and Liu Bie Ju Centre for Mathematical Sciences and the Hong Kong-based Croucher Foundation.

It is the sixth conference in a sequence that commenced in 1995. It has since developed into a triennial conference bringing together some of the most renowned academics in the field of computational mathematics. The attendance of so many of the world’s best mathematicians at the conference is a testament to CityU’s stature in the global mathematics community.

Professor (Chair) Roderick Wong Sue-cheun, Vice-President (Research) and Director of the Liu Bie Ju Centre, said more than 400 esteemed mathematicians from around the world would attend the 11-day conference. Professor Wong opened the conference and, as an invited plenary speaker, will deliver his talk entitled “A panoramic view of asymptotics”.

“The entire idea of FoCM is that we strive to break out of the narrow boundaries of our specific research areas and open our minds to the broad range of exciting developments in computational mathematics,” he said.

Professor (Chair) Felipe Cucker of CityU’s Department of Mathematics is the local coordinator of the conference and described the conference as one where mathematics meets computation; from numerical analysis to symbolic algebra, from complexity to optimisation. 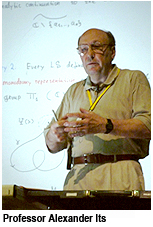 “The advent of computers, and their ability to number-crunch millions of calculations in seconds, has changed the ways in which mathematics is done. Concepts that once were only theoretical possibilities are now an everyday practice. With computers able to undertake such large scale processing, the subject matter of this conference was calling out for mathematics to look at it and understand its possibilities,” said Professor Cucker.

The conference will follow its traditional format of plenary lectures by invited speakers in the mornings and theme-centred parallel workshops in the afternoons. Each workshop extends over three days and the conference will consist of three periods, each comprising different themes.

The conference’s opening plenary speaker was Professor Alexander Its, Distinguished Professor of Mathematics at Indiana University-Purdue University, in Indianapolis, US, who delivered his talk entitled “Special functions and integrable systems”. Professor Its works at the interface between mathematics and physics and has been a central figure in the development of the theory of integrable systems for the past 25 years.