“We are heartened and excited to hear that Mr Leung has been appointed Council Chairman of CityU,” said Professor Way Kuo, President of CityU.

“Mr Leung is no stranger to the higher education arena. He has deep knowledge of how universities function. Among other things, he has been Council Chairman of Lingnan University for many years,” Professor Kuo added. “Apart from higher education, Mr Leung’s contributions to public and community services are exemplary. In addition to his role as convenor of the non-official members of the Executive Council, he also is chairman of the Coalition of Professional Services and One Country Two Systems Research Institute,” Professor Kuo said.

“We are fully confident that Mr Leung will lead CityU to scale new heights in both teaching and research,” Professor Kuo said. 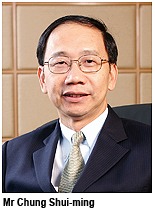 “I’d like to take this opportunity to thank Mr Chung Shui-ming, our Council Chairman, for his contributions to the University” said Professor Kuo. “Under his leadership, CityU has attained tremendous achievements. Among others, our world ranking has climbed from 178th to 149th in the past two years,” Professor Kuo said.

“In the next few months we’ll continue to work closely with Mr Chung to meet the 3-3-4 curriculum-structure and other challenges; and we look forward to working with Mr Leung as a team in October,” Professor Kuo said.

Mr Leung has a BSc degree in Valuation and Estate Management from Bristol Polytechnic, UK. He also has honorary Doctor of Business Administration degrees from the University of the West of England, UK, and Hong Kong Polytechnic University. He is a Fellow of the Hong Kong Institute of Surveyors.