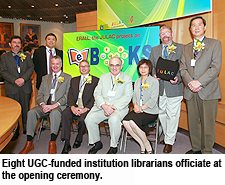 The conference was an initiative of the Electronic Resources Academic Library Link (ERALL) consortium formed by the eight University Grants Committee (UGC)-funded institution libraries in 2006, for the purpose of purchasing e-books for shared access and perpetual ownership.

The conference brought together librarians from higher institutions in Hong Kong, Australia, mainland China, Macau, Singapore, South Korea, Philippines, Taiwan, the US and UK to discuss their knowledge regarding the acquisition and use of e-books, including collection development, publicity and promotion, user instruction and training, usage and curriculum integration. Experts from the industry were also invited to share their thoughts on e-book trends, research, commercial negotiations and licensing.

In his opening address, Mr Stone stressed that with the implementation of the new 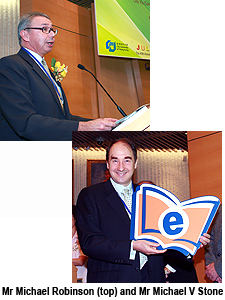 four-year structure in tertiary institutions, there were competing demands for campus space to cope with the expansion. The benefits of ERALL were not confined to maximising titles and saving space but also in offering students remote access to electronic resources around-the-clock.

Professor Lam acknowledged the continuous support of the UGC and the eight libraries in making the collaborative collection development project a success. He said the internet had already become an indispensible part of the modern life, with e-books playing an increasingly important role in education. 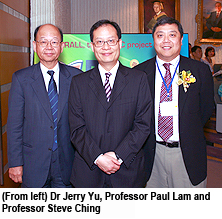 "To stay in touch with rapidly changing technological trends, libraries in Hong Kong shall continue to strive to establish an outstanding e-book collection to facilitate new teaching and learning behaviours," Professor Lam said.

The conference marked the 40th Anniversary of JULAC and reflected the strong spirit of cooperation between the UGC-funded institution libraries of Hong Kong. Mr Robinson said, "In addition to creating a new resource for our staff and student communities, the ERALL project also typifies how the success of JULAC has come about through a strong sense of shared vision and purpose amongst the directors and staff of each of the member libraries." 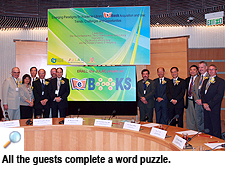 A highlight of the opening ceremony saw all officiating guests and representatives from the eight JULAC members completing a word puzzle. The compilation of the word, "EBOOKS", provided a visual representation of the harmonious cooperation among members.

Professor Steve Ching Hsianghoo, University Librarian of CityU, said the ERALL project was a momentous breakthrough that altered the traditional electronic resources acquisition model in Hong Kong. "This shared access mechanism means duplication is being kept to a minimum. The value-added features, such as full-text search capabilities and the availability of personalisation tools, and the round-the-clock convenience of e-books enables libraries to deliver scholarly content in a seamless, fast and customised manner to suit the needs of the internet generation," Professor Ching said.