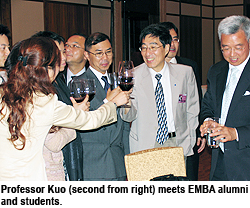 More than 100 EMBA alumni and students spent an enlightening evening with the Hon Dr Rita Fan Hsu Lai-tai, President of the Legislative Council, and Professor Way Kuo, the new President of City University of Hong Kong (CityU), at the EMBA Association of CityU Annual Dinner 2008 on 16 May.

Having recently been elected a Hong Kong deputy to the Standing Committee of the National People's Congress of the People's Republic of China, and as an Honorary Doctor of CityU, Dr Fan was invited as the guest of honour to deliver a keynote speech titled "Overcoming Adversity to Scaling New Heights: my experience on work and family".

In view of the massive destruction caused by the Sichuan earthquake and the tragic scale of the loss of life, all participants observed a one-minute silence at the start of the event to pay their respects to the victims. 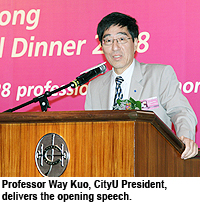 In his opening speech, Professor Kuo said he was very excited to join the annual EMBA Association gathering, having taken up his new role for less than a week.

He praised the EMBA graduates for making such an impressive contribution to the Hong Kong, mainland and global economy over the years, while at the same time bringing the calibre of CityU's graduates to public attention.

"On behalf of the faculty and staff of CityU, I would like to assure you that we are going to work very hard on your behalf," Professor Kuo said. He stressed that the association's members were promoters of the CityU brand and that he, in return, would work to ensure the CityU brand reflected well upon them.

"I'm glad to be a family member of CityU and Hong Kong. Together we have a lot of ambitions and achievements, and we want to grow, to be held accountable, and we are an important part of the integrated society," he added.

Welcoming the guests, Mr David Chiu Kwok-lee, Chairman of the EMBA Association of CityU, said it was a privilege to have both Professor Kuo and
Dr Fan at the annual dinner. Mr Chiu took the opportunity to point out that the Faculty of Business at CityU recently became the first business school in Greater China to receive accreditation from three prestigious organisations, namely AACSB, EQUIS and the Association of MBAs.

"This is the 11th year of the EMBA Programme, which has nurtured 228 graduates and will grow into an even bigger family," Mr Chiu said. "We are confident we will scale new heights in the future."

In introducing the guest of honour,
Professor Richard Ho Yan-ki, Special Advisor to the President and Chair Professor of Finance, said
Dr Fan has maintained a reputation for impeccable integrity throughout a political career spanning more than 30 years.

Dr Fan weathered the major political events of the last 30 years and is a living embodiment of the contemporary history of Hong Kong politics, Professor Ho said.

"Moreover, she has a strong association with the tertiary education sector, including her tenure as the Chairman of the Education Commission from 1990-1992, when the government increased the number of universities and number of undergraduate places in Hong Kong," Professor Ho added.

Before delivering her keynote speech, Dr Fan extended a warm welcome to Professor Kuo and said it was wonderful to have his presence at the event.

In her speech, Dr Fan said that when faced with adversity, be it circumstances of nature or personal matters, it was important for people to remain positive and to never give up.

"When we are faced with failures, we can grieve for a while but we should not stop there. We need to revisit what we have done wrong and learn from our mistakes. Most important of all, we should not be affected by our failures and should take them as opportunities for improvement," she said.

"Whatever we do, it is paramount that we prepare for both the best and the worst, which will help us to become more cautious."

In response to a question on how Hong Kong people should prepare themselves for possible adversity in the future, Dr Fan encouraged them to enrich themselves with knowledge and skills, while at the same time adhering to our "can-do spirit". 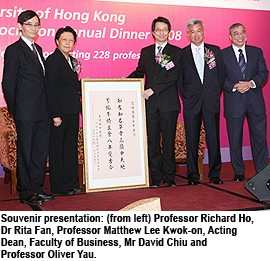 "Hong Kong has the advantage of being close to the mainland and we should seize this opportunity and identify our niche areas so that we can contribute both to our country and Hong Kong," Dr Fan stressed.

To thank Dr Fan for her insightful speech, the University presented a special souvenir to her - a couplet composed by Professor (Chair) Oliver Yau Hon-ming, from the Department of Marketing. The couplet focused on her qualities of being impartial, moderate and having the ability to effectively judge a person's character.

A toast was proposed by the guests and the executive committee of the EMBA Association saluting CityU's scaling of new heights. This was followed by a series of stage performances and lucky draws on a fun-filled evening.