Guizhou study tour: in touch with the ethnic minorities 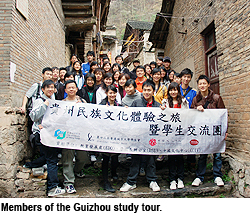 I was one of the students who had the opportunity to take part in the Guizhou study tour jointly hosted by the Chinese Civilisation Centre and Students’ Union from 20 to 25 March. The tour was led by Dr Fung Chi-wang and
Mr Kwok Kam-hung of the Chinese Civilisation Centre, with Mr Lee Wai-kit, founder of Western China Cultural Ecology Research Workshop, as our tour guide. My role was tour photographer and coordinator of the exhibition held later on campus at CityU.

During the six-day trip, we visited many places in Guizhou Province, including the ancient cities of Zhenyuan and 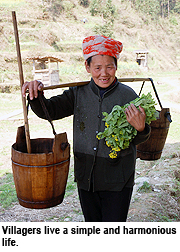 Longli, and the Miao and Dong villages at Wendou and Dimen respectively. We studied the culture of ethnic minorities in Guizhou, learned about the special features of Miao and Dong tribes, compared the differences between the Han people and ethnic minorities, and analysed their cultural impact on minority groups and the difficulties they face. The Miao villagers were very generous and friendly. They served us their best food and entertained us with folk songs and dance. Their hospitality reminded us of a Chinese saying, “Good friends will never be bounded by distance but always feel close together.”

On the last day of our trip, we visited Dimen Primary School for Dong children located in the south-east of Guizhou. The 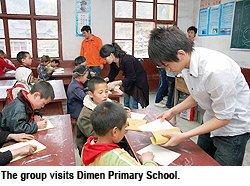 school included Dong culture, folk songs and dance in the curriculum so children could learn and pass on their culture from one generation to another. We played games with the children and gave them books, stationery and souvenirs. It was a joyful and meaningful day - and a perfect ending to our trip.

Upon our return, I organised the exhibition of the ‘Study Tour of Ethnic Culture in Guizhou’ that was held for two weeks on campus to share our experience with teachers and students of the University. As the coordinator of the exhibition, 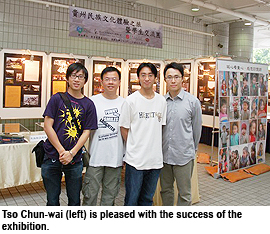 I was responsible for the design of the venue, posters and display boards as well as the production of postcards and souvenirs. I worked hard day and night but felt gratified when I saw crowds gathered around the display boards. There was even one enthusiastic visitor who expressed a willingness to make a sizeable donation towards Guizhou’s primary school education and city development.

I wish to express my sincere gratitude to my tutors, who provided this valuable opportunity. Also, I wish to thank them for their trust in appointing me as the exhibition coordinator for the Chinese Civilisation Centre for the second year. I hope the exhibition can be held in other places so that more people can learn about the culture of Guizhou and lend their support to the people of that province.