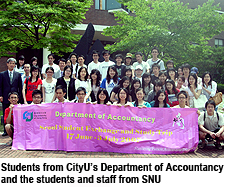 I was one of the 25 students from the Department of Accountancy at City University of Hong Kong (CityU) who had the opportunity to go on a study tour hosted by Seoul National University from 17 June to 3 July. The tour was led by Dr Charlie Sohn Byung-cherl, Assistant Professor, and Ms Deborah Chai Hweei-sien, Instructor, both from the same department at CityU.

Classes were conducted in English by Dr Choi Jong-hag, Assistant Professor of the College of Business Administration at SNU. We had to complete a project and prepare a presentation working in mixed groups. We received three credits for the course after successfully completing the coursework and examination requirements, equivalent to Managerial Accounting offered in the Department of Accountancy at CityU. 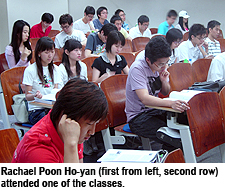 At first we found our Korean classmates quite passive. They quickly left after lectures. So we didn't have much chance to talk with them the first few days. So, my friend and I started chatting with a Korean student during the break and made our first friend in class. Since we needed to do a group project, we had more opportunities to get to know the Korean students. I discovered they were very polite and considerate, helping to call for deliveries during lunch-time and ordering non-spicy food for us, because they knew that we didn't eat spicy food.

In addition to studying, we visited Samsung (electronics), POSCO (steel-making) and Hyundai (shipbuilding). These companies are well-known in the world. Samsung shared their management philosophy and history and showcased their new products; POSCO provided a guided tour of their plant and museum, giving us an idea of how much the company had contributed to the development of South Korea during the post-war years. The tour to the Hyundai shipyard was an eye-opener. We saw dry docks and special vehicles transporting materials and parts for ship-building.

After these visits, I had a better idea about the latest electronic appliances from Samsung, the iron and steel making processes from POSCO and the ship-building industry from Hyundai. But the most significant thing that I learnt was the importance of adaptability in today's business world. All three companies managed to succeed and sustain their success by adopting different strategies and initiating new programmes in order to respond to changes in the overseas markets. 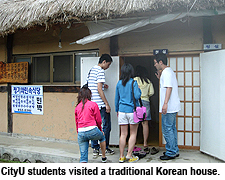 There were also a number of city tours to help us familiarize with Seoul. We went sightseeing, ate Korean barbecue and spicy dishes and went shopping. We visited Gyeongbok Palace, the National Folk Museum and an antique market street in Insadong. These trips helped us to learn more about Korean culture and development.

Despite language difficulties, as very few locals spoke English fluently, we managed to 'survive' and enjoy the 17-day experience, adapting to the new environment and taking an interest in Korean culture. The SNU students accompanied us on our shopping tours and translated for us, which was a great help, and we even visited a fascinating local spa.

The trip was truly unforgettable and broadened my horizons. I won't hesitate in joining an exchange programme in the future.