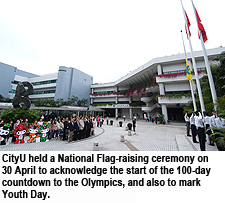 The China Proper Track Society of the Students’ Union held a National Flag-raising Ceremony on 30 April to mark the Youth Day. With the 100-day countdown to Beijing Olympics which coincided, Mascot Fuwa also attended the ceremony. In a major Olympic honour, Lam Tak-kwan, a year 1 Associate of Business Administration (Global Business) student, was chosen as a torch-bearer in the Hong Kong Torch Relay.

Colleagues and students gathered at University Circle at 8am to witness the ceremony. In a reverential atmosphere, the national flag, regional flag of the Hong Kong Special Administrative Region and CityU flag were raised to the accompaniment of the national anthem. Professor Richard Ho Yan-ki, CityU’s Acting President, Professor Paul Lam Kwan-sing, Acting Vice-President (Undergraduate Education), and Professor Lilian Vrijmoed Kwan Lee-ping, Dean of Student Learning, attended as guests. Olympic mascot and Fuwa added a dash of colour to proceedings. 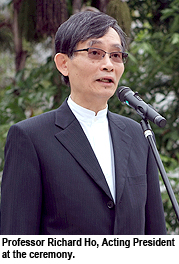 Professor Richard Ho said that with the 100-day countdown to the Beijing Olympics, the ceremony had far-rearching significance, “It has been our dream for many years to host the Olympics. In doing so, Chinese can stand up and demonstrate the political and economic power of our country. More importantly, the spirit of the Olympics this year is 'One World, One Dream'. My interpretation of that is that people from all over the world are free from starvation and the world can be developed harmoniously.”

Professor Ho also pointed out that the May Fourth Movement also took place in Beijing 89 years ago, when young people at that time utilised the movement to arouse awareness of the strength of China. He encouraged young people to not only be aware of the individual and our society, but also of issues such as starvation, poverty and environmental pollution, to ensure a better future. 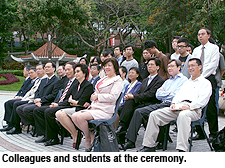 Professor Vrijmoed said, “The flag-raising ceremony and playing of the national anthem enhances our affinity with our country and loyalty to it.” 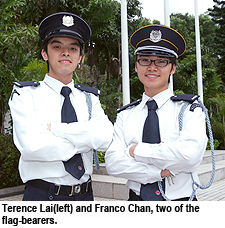 Terence Lai Wai-kuen, year 1 student in the Department of Information Systems, was excited and honoured at being a flag-bearer. “The ceremony increases students’ sense of national identity and belonging,” he said. For Franco Chan Chun-ting, year 2 student in the Department of Building and Construction and the leader of the flag-raising team, it was his second time participating in the ceremony. He described it as especially significant due to the Olympic countdown. 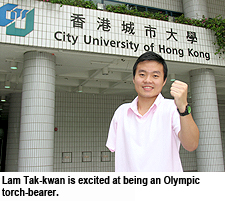 Lam Tak-kwan, a year 1 Associate of Business Administration (Global Business) student, will be the 72nd Olympic torch relay runner in Hong Kong when he carries it in Shatin. He said that he had never considered being a torch-bearer and felt very excited and honoured to earn the right. He speculated that his never-give-up attitude was the key to his being selected. “In good and bad times, in studies or sport, if I am upset about something I cool down and identify the goal again. I always achieve the goal in the end,” he said.

Lam Tak-kwan has won various titles in international badminton contests for the disabled and remains true to his goals. His story sets a magnificent example to all young people.