The China Proper Track Society of the Students’ Union of City University of Hong Kong (CityU) presented a National Flag Raising Ceremony on 4 May, exemplifying CityU’s spirit of whole-person development. 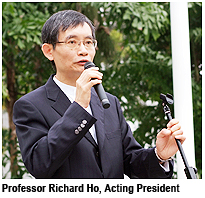 In a solemn atmosphere, colleagues and students gathered at the University Circle at 8:30 am to witness the student flag-guards raise the National Flag, the Regional Flag of the Hong Kong Special Administrative Region and the CityU Flag as the national anthem played.

“The May Fourth Movement 88 years ago awakened the patriotism of the Chinese and the soul of intellectuals,” said Professor Richard Ho Yan-ki, Acting President of CityU. He told participants that he organized a memorial activity to commemorate the May Fourth Movement when he was a student in the US more than 30 years ago, and he had been deeply impressed. At that time, he interviewed Professor Zhou Cezong, 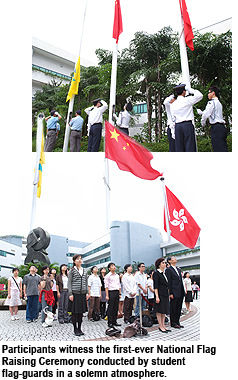 “I hope the National Flag Raising Ceremony can deepen students’ sense of national identity and raise their awareness towards our country’s current affairs,” said Franco Chan Chun-ting, a Year 1 student in the Department of Building and Construction and the external affairs secretary for the China Proper Track Society.

In addition to representatives from the China Proper Track Society, four students from different CityU departments joined the ceremony as flag-guards.