Two secondary school students have taken home the international group championship in the Young Scientists (Unge Forskere) competition held in Denmark, with the anti-bumping lock they invented during a summer programme organised by the Faculty of Science and Engineering of City University of Hong Kong (CityU). 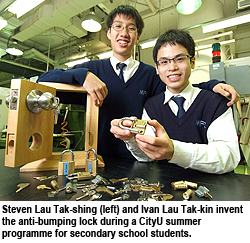 Steven Lau Tak-shing and Ivan Lau Tak-kin are Form Three students at Maryknoll Fathers' School. The excited winners expressed their thanks to CityU for its support and for affording them the opportunity to develop their concept.

Professor Henry Chung Shu-hung, Associate Dean of the Faculty of Science and Engineering, praised the students for their outstanding performance and said their achievement was testimony to the faculty’s work in promoting scientific research.

“We hope to broaden the scientific knowledge of the students and encourage them to do their own scientific research,” Professor Chung said. “We would like secondary school students to employ their creativity in future summer activities. The two students from Maryknoll Fathers’ School are a good example of what students can achieve by joining our summer programmes,” he said.

The idea of an anti-bumping lock that could counter bump keys, which work in all types of lock and can be used for picking them, first came to Ivan and Steven’s mind in summer 2006, when they were asked to conduct scientific research during the Project-based Outreach Programme, a summer activity organised by the Faculty of Science and Engineering of CityU. They studied why bump-keys could easily open pin tumbler locks and then presented their new anti-bump lock concept.

CityU professors were impressed by their idea and encouraged them to develop it further. With the help of technicians from the laboratory of the Department of Manufacturing Engineering and Engineering Management, they studied the structure of pin tumbler locks and eventually created the prototype of the anti-bumping lock. The patent they took out on the design was later purchased by a mainland lock factory.

Before the competition in Denmark, Ivan and Steven had already won a number of competitions. They received first 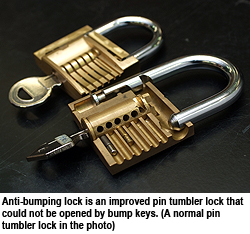 Ms To Yuen-man, Ivan and Steven’s teacher at Maryknoll Fathers' School, thanked CityU staff for all their support. “The summer programmes have given the students opportunities to explore their interest in science and to be creative with science.” She expressed her hope that CityU would keep organising these activities for the benefit of secondary school students in Hong Kong.

Ms To also extended a special thank you to CityU technician Mr Au Sze-yin. Mr Au helped the students find lock materials on the street and cut some locks in half so the students could study the components and structure.

The Project-based Outreach Programme will be held from May to September this year. Participants will have to form teams to conduct research on selected topics. CityU students will act as team mentors. The participants will present their research results in September.

Apart from the outreach programme, the Faculty of Science and Engineering will organise two other summer activities. The Student Project Exhibition will be held from 26 May to 27 May, where CityU students will showcase their creative scientific projects. The Science and Engineering Fun Days will be held from 23 July to 25 July, introducing secondary school students to some of the more practical and fascinating facets of scientific knowledge through a range of talks and more than 20 types of experiment.

For more details of the programmes, please visit the CityU website http://www.cityu.edu.hk/fse/summer2008/