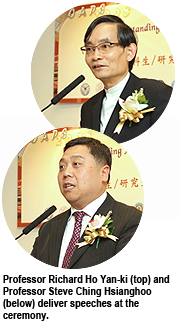 OAPS is one of CityU’s Digital Library Initiatives and Institutional Repository Projects, storing CityU students’ research output in digital format so it is readily accessible to the tertiary community as reference material.

Delivering welcoming remarks at the award presentation ceremony, Professor Richard Ho Yan-ki, Acting President of CityU, said the success of the project was attributable to the involvement and support of all departments. He was delighted with the high quality of academic papers written by the students. “It has been pleasing to see so many outstanding academic papers written by our students become widely accessible through a central digital platform since the introduction of OAPS in 2005,” he said.

Professor Steve Ching Hsianghoo, University Librarian, was particularly appreciative of the multinational composition of the project. “OAPS not only provides support of teaching and learning but also makes it possible for outstanding student works to become widely accessible and gain recognition,” said Professor Ching.

A discussion session at the award ceremony, in which students explained their research and the work that went into it, was hosted by Professor Paul Lam Kwan-sing, Acting Vice-President (Undergraduate Education); Professor Lilian Vrijmoed Kwan Lee-ping, Dean of Student Learning: and Ms Catherine Quinlan, Dean of the University of Southern California Libraries. Department heads or delegates presented the certificates to students.

Tang Pui-tung, a graduate from the Department of Applied Social Studies, received her award for her final-year paper, Romantic relationship: Love styles, triangular love and relationship satisfaction. “I spent a great deal of time and effort on writing this paper. The conferment of the certificate has confirmed that my efforts were worthwhile,” she said.

Man Kin-pong, a graduate from the Department of Computer Science, was honoured for his final-year paper, Server side support for SiteWatcher, an anti-phishing software. “The fact my work is being recognised by others gives me an indescribable sense of success,” he said.

A graduate of the Department of Electronic Engineering, Wong Ching-tin said the certificate gave him a great sense of satisfaction. “Through the compilation of my final-year paper I have learned to study hard, which is a great help to my current work in the telecommunication industry,” he said. His final-year paper was Multiple-access schemes for IEEE 802.15.4a.

School of Law student Cheng Wing-ming’s paper was titled Prospects of bicameralism for Hong Kong legislature. He pointed out that interest in the subject matter and hard work were essential elements of a well-written paper, while a combination of theory and practice was also important. “The award has boosted my confidence and encouraged me to work hard to complete the programme,” he said.

All award-winning papers are now on display at the Learning Commons in the Library.

CityU gives recognition to students who excel in academic writing