The final of the Hong Kong Underwater Robot Challenge 2008, jointly organised by City University of Hong Kong (CityU) and WWF, took place on 6 April in the CityU swimming pool, with The Shau Kei Wan Government Secondary School team beating 20 other entries in a high standard competition. 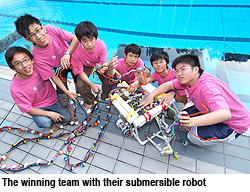 “We spent two or three hours a day after school preparing for this final and worked until midnight in the days leading up to it,” said winning team member, Lee Ying-yin. “Because of the difficulty of finding a public pool to practise in, we had to build own small pool to test our robot and then make good use of the practice day (5 April) before the final,” he said. Other members of winning team were Li Tsz-yen, Yan Ho-ting, Lee Kai-ho and Chan Ka-chai.

Dedication and hard work was a recurring theme among the successful teams, with the team leader from the second placegetter expressing a similar sentiment to the winning side.

“We were very tired after spending three hours a day after school working on our underwater robot,” said Benson Kwong Ho-wing. “We were actually quite scared when we saw the high standard of all the other entrants but we just focused on our own performance,” he said, before praising the organisers for such a well-managed event.

After several months of preliminary competitions and field trips to WWF’s Hoi Ha Wan Marine Life Centre in Sai Kung, the students acquired the basics of robotic technology and marine conservation, knowledge utilised during the exciting finale of this innovative contest. Eighteen of the competing schools also attended a series of workshops held at CityU in January, where they built and tested their underwater remote-operated robotic vehicles. 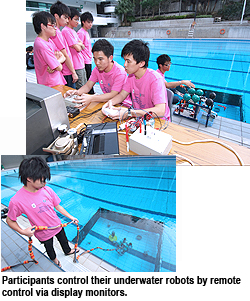 The competition typified CityU’s commitment to fostering research talent among its current and potential students.

The event theme focused on hydrothermal events found at mid-ocean ridges and the technologies used to study these deep-sea environments. The students were required to control the underwater robots they designed to complete various tasks in the swimming pool.

“The underwater robot challenge 2008 has again proven to be a success. WWF is very pleased to collaborate with CityU for the third year of this educational activity,” said Mr Eric Bohm, CEO of WWF Hong Kong. “The winning teams have demonstrated how innovative robotic technology can be applied to marine conservation. Protecting the ocean requires a collaborative effort and the creativity and enthusiasm of our young generations, for the future of our planet,” he said. 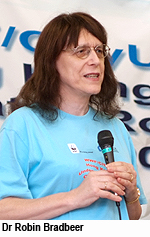 The competition is the regional stage of Marine Advanced Technology Education (MATE) International Remote Operated Vehicle (ROV) Contest. Winners of the challenge event at CityU have earned the right to attend the 2008 MATE International Finals to be held in San Diego, United States in June, subject to sponsorship arrangements. The winning team won $5,000, while the runners-up took $3,000, all donated by the Institute of Engineering and Technology, Hong Kong (IET). The judges were IET representatives Dr David Cheng and Mr Francis Leung, Mr Paul Hodgson, Managing Director of Oceanway Corporation, and CityU’s Dr Robin Bradbeer, Associate Professor, Department of Electronic Engineering.

Over the past few years WWF and CityU have established a close working partnership, especially in the field of environmental research and conservation. The laboratory occupied by the joint research team from the CityU Departments of Biology and Chemistry, and Electronic Engineering has, at the WWF Marine Life Centre, pioneered the use of technology in monitoring the marine environment.

“The Hong Kong Underwater Robot Challenge enhances the interest of the more technologically inclined students, as well as widening the scope of the WWF education efforts,” said Dr Bradbeer.

Marine robot competitors put their underwater machines to the test